The impossible, the improbable, and the impractical

One of my co-workers added this little inspirational tag to their profile last week: "Nothing is impossible, only mathematically improbable."

Any longtime Sherlock Holmes fan has to have an immediate, almost instinctual, reaction to that statement. "Nothing is impossible? What can you eliminate, if that's the case? How do you get to the truth? "

Because, as Sherlock's dictum tells us, time and again: "Once you have eliminated the impossible, whatever remains, however improbable, must be the truth."

I was surprised at how strong my feelings about the impossible were. If not for the impossible, I would constantly be jumping into the air, hoping that I would fly on one of my attempts. If not for the impossible,  my list of personal goals would shoot through the roof and form a ladder to the moon -- because that wouldn't be impossible any more, either. The impossible makes our lives livable, because we're not sitting at our work desks with a crucifix and a crossbow, ready for potential daytime vampire attacks. (This is probably on my mind as I work at an office -- when I'm in my office -- full of crucifixes. No crossbows though, because no daytime vampires.)

We live in a time when many of the things that Sherlock Holmes would have ruled impossible are now possible. What, you woke up, travelled a thousand miles, had lunch, travelled a thousand miles back, and slept in the same spot you work up in? Impossible in 1887, not so impossible now. We all carry magic genies in our pockets, and our personal list of "possibles" has increased to an exponential degree from what was available even to Queen Victoria during Sherlock's time.

While it becomes tempting to say things like "Nothing is impossible," the thought is, at the very least, impractical. We can't do everything. We can't perfect everything. But as Sherlock Holmes said, "We can but try." And we also really need to eliminate those pesky impossibles in looking for possible explanations for things. As Holmes also said, "No ghosts need apply." He plainly placed them in the bucket for "impossible."

And why not? Otherwise, the minute ghosts entered the equation, anything becomes possible and there's no reason to keep looking for actual explanations. How does this blender work? Ghosts! Why doesn't the mailman show up until two in the afternoon? Ghosts! Who killed Sir Charles Baskerville? Ghosts!

While Sherlock Holmes might have called himself "the most incurably lazy devil that ever stood in shoe leather," he was not nearly as lazy as the person who stops at the first imagined explanation for an event, a.k.a. ghosts, not to be picking on ghosts all the time, but . . . ghosts!

We've got enough intellectual laziness out there right now without letting the ghosts apply.

Is believing in the impossible a thing now? Another side we have to choose? Well, as I have just proven to myself the impossibility that twin versions of me are sitting next to each other typing this by alternating one-finger pecks on the keyboard, I think there might just be such a thing. While it might still seem improbable, yet possible, to the reader, I think you should trust me on this one. Twin blogging Brads looks pretty impossible on this side of the screen. So I'm going to eliminate it, myself, but you do you.

Good luck figuring out your own impossibilities to eliminate. 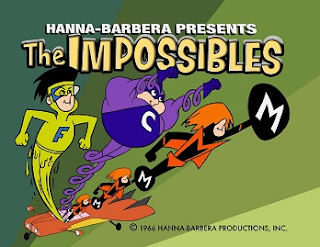 And P.S. . . . don't eliminate these guys. They were my first favorite rock band.

Posted by Sherlock Peoria at 10:25 PM