Here's something in my basement. 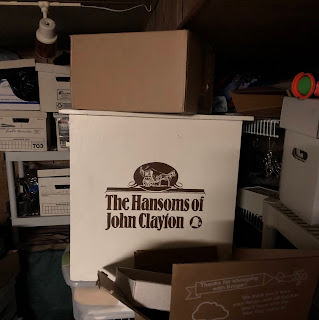 It's the official podium of the Hansoms of John Clayton, the Sherlock Holmes society of Peoria, Illinois.

Built during the heyday of the Hansoms, it once moved from house to house, meeting to meeting, and from behind it, toasts were given, presentations were made, and the Clayton Ritual was responsively read. It was the centerpiece of Sherlockian functions in Peoria for decades. And here it sits.

I've started and abandoned a few Sherlockian societies in my day. Who knows? They might still exist, on hiatus until some air-gun crime of fate lures them back into town. But I did not start the Hansoms of John Clayton, and its slumber weighs more heavily on me for that very reason. Even though one of the original founders still roams the Earth, somewhere other than Peoria, I was the one left holding the reins when it quietly came to an end. Once the meeting attendance dwindled to four people in the early 2000s, and the only two regulars lived in my house, it came time to call it "on hiatus."

A legacy Sherlockian society will always weigh heavier than your own personal attempts that fail. You never know the limits of what your locale or speciality will bear until you try, and all trial holds that potential for failure. But that other thing, that thing someone else started and had a good run with, before handing it off to you, whether or not you actually wanted it . . . well, nobody wants to be the one to turn off the lights on their way out the door.

Now, before you go, "But Brad . . . !" in a burst of Sherlockian fervor, let me get to the other side of that coin, our enthusiam. When people get fancy with our hobby, they like to call themselves (and us, just because they don't want to seem to egotistical) the exotic sounding words "afficianados" or "devotees." The better fancy word might be "enthusiast," because enthusiasm is what drives us, our enthusiasm for all things Sherlock and John.

New ideas give you enthusiasm.

"Hey, let's have a month-long quiz every August!" (Did I get too specific there? Maybe.)

And every one of those things is great, especially that first time. And the second or third. And maybe for a while. But every new idea ought to have an automatic term limit built in, because even if you're someone who loves ritual and routine, eventually you're going to hit your life's term limit and someone else is going to have to continue that repetition, playing your greatest hits night-after-night as the cover band with the same name as the original.

Now, Sherlockiana has had some really great achievements in carrying on traditions in some areas, but has also paid the price for some of those as well, when holding on to past glories has stunted current potential for new glories. It's a very hard balance, keeping enough of the old to have some sort of continuity while keeping things fresh enough to make it interesting for those who aren't into the security of the same-old, same-old. A lot of times, that's accomplished by passing a duty from hand-to-hand-to-hand. But we can't just expect people to carry things on in exactly the fashion they were before like robots. Even that mega-corporation McDonald's, the king of comforting sameness, couldn't keep things how they were forever.

I was having a conversation with a friend of mine yesterday, as he was contemplating taking up a new Sherlockian task. I might have been exactly the wrong person for that conversation, being a little burnt-out on some things at the moment -- there are some of us who cycle burn-out and enthusiasm as if we're the cylinder of an internal combustion engine. But that's Sherlockiana. That's any creative endeavor. You're gonna have high energy moments, and you're gonna hit rock bottom. But if you find a fuel line to keep the motor running, you'll be okay.

Okay, got lost in my metaphor for a moment there. The point is, as much as Sherlockiana is a joy and a light in our lives, there can also be a laborious side to it, where hard choices have to be made and that beautiful idea someone had once does not get to go on forever. As any creative person knows, you get idea after idea after idea, and if you jump from one to the next constantly, you'll never accomplish any of them. But at the same time, we can't beat a dead horse at the cost of getting those new thoroughbreds out on the track. (Gone from engines to horses. Metaphors!)

Today is Labor Day in America. We don't usually stop and think about folks who labor at the tasks that keep our world running, both inside and outside Sherlockiana. Podcasts like "I Hear of Sherlock Everywhere" and "The Tree Patch Podcast," publications like Canadian Holmes, The Serpentine Mews, and those ones with "Journal" in the title. The Baker Street Journal and The Sherlock Holmes Journal probably get the least respect in terms of the labor that goes into them, as we can easily look at institutions like those and just think they magically exist because they always have. But there are people behind all those things who are carrying a load, a load they bear in addition to their normal workaday lives, if they aren't retired folks, which so many aren't.

We are enthusiasts. That's what starts us out, that's what drives us. But no matter what you do in Sherlockiana that isn't just taking it all in, there's going to be some labor involved eventually. So, on this Labor Day, here's to you, all you laborers in the Sherlockian and Holmesian fields past and present. This oft-irritating blogger loves you all and the work you do, the work you try, and even the work you occasionally fail at and have to quit. It's all part of our laborious "game."

Posted by Sherlock Peoria at 8:39 AM