In my library, there is a book published by the Mysterious Press in 1976, entitled The Adventures of Herlock Sholmes by Peter Todd. It contains an introduction by Philip Jose Farmer, one of Peoria's rare bestselling authors, and in it, Phil wrote:

"Recently, I decided to found a scion chapter of the Baker Street Irregulars in my home town, Peoria, Illinois. This is 'The Hansoms of John Clayton' -- a title happily combining my passion for Sherlock Holmes and Lord Greystoke, born as John Clayton, better known as Tarzan. (W.H. Starr of The Sons of the Copper Beeches scion has theorized that the cabbie, John Clayton of The Hound of the Baskervilles, was actually the grandfather of Tarzan.)"

Of course, when Phil Farmer said, "I decided to found a scion chapter," he didn't exactly follow through -- busy writer and all -- so it wasn't until November 17, 1977 when Bob Burr forced the issue and held a meeting at his house, that the group actually got started. Five members showed up: Phil, Bob, George Scheetz, Emily Sutton, aand Alex Ciegler.

In the decades that passed, the group both thrived and dwindled, and eventually Bob himself lost interest in it, which was a hard hurdle to get past for those of us that remained. Every group has a "sparking plug" (or two or three, if you're lucky), and when ours lost his spark, the engine that was the Hansoms eventually just locked up.

Now, it's thirty six years after that original start, and six years since the last recorded gathering of any Sherlockians under that club's banner. Only one of those original Hansoms still walks the Earth, and he's very hard to find. Bob Burr's passing combined with the enthusiasm of a couple of local Holmes fans, however, has made this old Sherlockian cab-horse realize that maybe Peoria's Sherlockian legacy needs to be pulled a bit further into the future. So it is, that the Hansoms of John Clayton are set to meet once more on March 15th. I already know of five people willing to show up, so we're back to square one.

But as I've said, The Hansoms of John Clayton, version 1.0, was Bob's group. It had its rituals and routines, all built in the Sherlockian 1980s, and they served us well. But it's thirty six years later, and, well, we're not just about the sixty stories any more. They are our core, our center, but in considering "The Adventure of the Empty House" for the theme of our first meeting, there is so much more to talk about. Three big name Sherlocks have gone over Reichenbach Falls on stage and screen since then, some with returns yet to be seen. And there's been this weird Sebastian Moran guy who isn't a sniper but exsanguinates people like hunters do deer. We have a lot to talk about. And we're not taking any quizzes this time around (Thank you, Occupants of the Empty House for being our guiding light there!).

We've got a great legacy of Sherlockian fellowship to draw from here in Peoria, but we won't be letting that stop us from being whatever it is to be a Sherlock Holmes society in 2013. And, personally, I'm kind of curious to see what that is myself.

If you're going to be in the area, and would like to see the start of The Hansoms of John Clayton 2.0 for yourself, just drop a line to mailroom@sherlockpeoria.net


And here's a bonus bit I found while digging up a thing or two tonight. 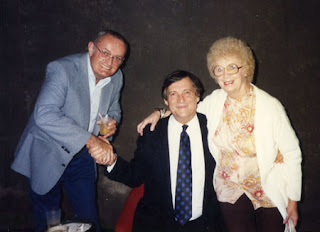 Burr, Brett, Sommerfield
St. Louis, 1991
(Me? I was still waiting for Benedict Cumberbatch!)

Posted by Sherlock Peoria at 6:37 PM