We have this cat, which we inherited from another Sherlockian who most thought didn't leave Peoria enough. He's a lovely cat, a classic fluffy golden tabby sort of fellow, and a bright one at that. Like our friend Sherlock Holmes, he can lie about and be the laziest thing imaginable, but when the game is afoot, he springs to life and is all energy. Unlike Holmes, however, he does not wait for the cases to come to him. When bored, he tends to start stalking whatever prey is handy.

Just like we do on the good old interwebs sometimes. For example, take this bit from today's Twitter feed: 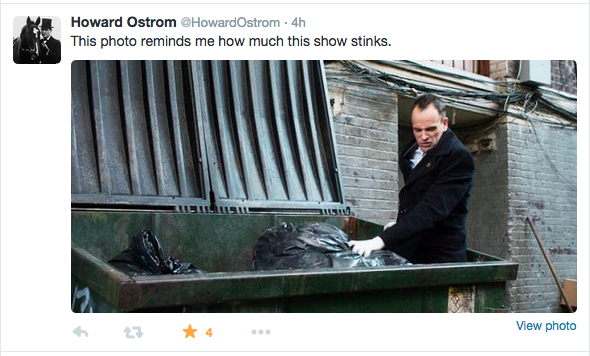 Now you might think, "Really? You're going to put Howard on display as an example of someone being mean just because they're bored?"

Did I say that? Nope. There's a reason I relate to my cat. And I'm the one that's bored. Time to play "How many captions can I write to go with that picture?"

Jonny Lee Miller picks up his latest script for a new Elementary!

Surprising Joan Watson with a wake-up was harder after she became homeless.

Not wanting Captain Gregson to see he'd wet his trousers, Mr. Elementary
pretended to dig for clues from inside the dumpster.

"I've heard you can find pink suitcases in these things if you look long enough!"

And it was then that he felt the first fin brush against his ankle . . . dumpster piranha!

If you see a big booty hooker in a trash bag prom dress in this picture, shame on you!

The network quickly realized that a green dumpster was a cheaper recurring character than Alfredo, Miss Hudson, or even Clyde, and started including "Trevor Trashbin" in every episode.

Mr. Elementary didn't really need to stand on Detective Bell's shoulders to get out
of the dumpster, but his "being an ass" quotient was down this week.

The annual "Who can act their way out of a plastic bag?" contest was close at that
year's production company picnic, but Jonny Lee popped out in a photo finish!

"And I thought they smelled bad on the outside!" he said, before taking shelter
for another winter night in downtown Hoth.

Okay, when the Star Wars references come out, it's time to call it a night. Thanks, Howard!