You may call him "Howard Ostrom." I call him "Oscar."

Oscar, it will be remembered, is the character from Elementary's season finale who lured, pestered, and generally shoved the titular Mr. Elementary into returning to his old heroin addiction. My personal Oscar, Howard, tossed this tidbit out on to Twitter today: 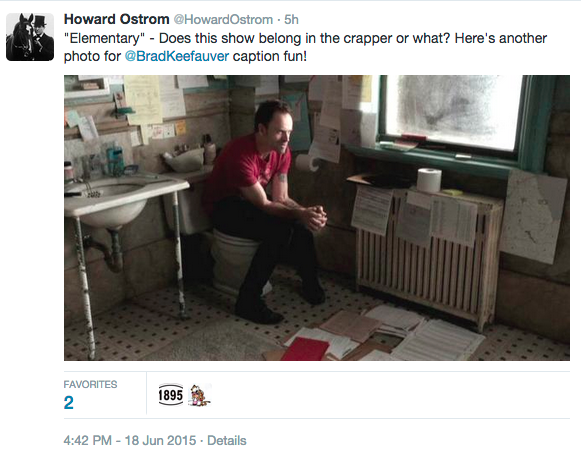 Now, I am a firm believer that one of our great human failings is that urge from earliest childhood to exclaim "Again!" whenever something delights us, and thus eventually drain any happy surprise of its joy by regular repetition. So I fully expect bad things to come from trying a sequel set of captions to a photo of Mr. Elementary in a refuse area. But unfortunately, I'm willing to try, despite at least one "Can't we all play nice in the sandbox?" plea after that last attempt. Poking a needle into Elementary's veins has become an addiction that I'm just a little too susceptible to. So, without further ado, let's get to the captions for Howard's photo . . .

Well, it's not the worst thing I've seen on an episode of Elementary.

Swim to the sea like Nemo, Clyde. The lid is staying down.

Mr. Elementary begins his research on the 247 varieties of paper that one
might wipe one's posterior with. What that had to do with crime,
no one would ever know. As with most of his studies.

Eventually he found that with enough mental focus, he could teleport
his bodily waste through several layers of cloth and plastic.

Joan Watson pressed her face and hand up to the fogged window, as Mycroft
took her against the alley wall. Neither of them really knew why.
It was almost as if God was really bad at writing fanfic.

This month in GQ: What does your body language on the toilet say about you?

Yes, it is a tribute to Joaquim de Almeida in "O Xango de Baker Street."

"Here I sit, all broken hearted . . ."
So began the love poem that caused Jamie Moriarty to fake her death yet again.

Tirelessly, he worked on his interpretive dance choreography through every waking moment.

A few moments before the sink actually tore itself from the wall and walked off the set.

Captain Gregson and Detective Bell were actually supposed to be in this scene,
but Quinn and Hill believed the stagehand's  admonishing "Do NOT go in there!"

Okay, let's flush this bit and let it mercifully swirl away, as so many sequels should probably do. On to better things and the hope that "Oscar" Ostrom lets rehab work its magic.

Instead of doing "Speckled Band," Elementary decided to pit their consulting detective
against the horror legend, the Ghoulies. Somehow, it just seemed to fit.

Posted by Sherlock Peoria at 10:07 PM