The Return of Deerstalker Duck.

Five times. Five times now. And every time I give him away, he just comes back.

I think I have a problem.

It's this duck with a deerstalker. 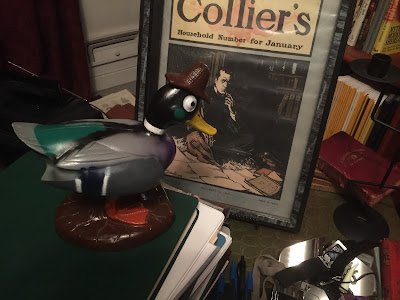 He's a example of one of the worst symptoms of Sherlock Holmes fandom -- the urge to own things that have a deerstalker hat on, whether or not they have anything to do with Sherlock Holmes. But this mad-eyed mallard, often seen with a canteen, does not even own a particularly good deerstalker cap. And he's more interested in saving wetlands than investigating mysteries, being that odd sort of beastie who seems to be working against his own kind, hence the hunting headgear.

The non-duck Sherlock Holmes actually seemed to enjoy duck-hunting, if we go by the evidence in "The Gloria Scott," and he was surely no Elmer Fudd at the sport. Holmes probably exterminated many a member of Deerstalker Duck's kind, during that summer between college semesters. Which could be why this duck stares to balefully in every Sherlock Holmes collection he's placed in, displaying a bug-eyed terror at seeing sharp-shooter Sherlock so much in evidence around him.

I must not be particularly fond of this duck, as I always find some reason to give him away, as a prize, as a gesture, as . . . well, any occasion that arises.  And yet, when he turns up during my travels, as he did recently at the Pink Elephant Antique mall, for the reasonable sum of five dollars and ninety-five cents, I seem to automatically tuck him under my arm and march to the checkout counter.

And then here he is again.

Had I saved every specimen of Deerstalker Duck that I've encountered over the years, I could have hosted a lovely duck hunt of my own some summer. And I may yet.

But for now, the curse of the deerstalkered duck continues. I should just be thankful it's not a Baskervillian hound from Hell.
Posted by Sherlock Peoria at 8:51 PM