Though it's been out for a while, this week was the first time I had heard of Skybound Games's Superfight card game. Having had a lot of fun with their ever-popular Cards Against Humanity, and loving the description of Superfight, I ordered it immediately. And when the 500-card starter box arrived today, the first thing I did was flip through the character cards to see if Sherlock Holmes was there. And he was.

So just to see how the game works out, I laid Sherlock on my desk and had my trusted companion pull another character card from the deck: Polar bear.

Sherlock Holmes was going to fight a polar bear.

And now the next step of the game. My trusted companion picked a card from her three-card hand to add to the polar bears powers, and chose "frost breath." She then picked a second attribute card from the deck at random: "Wall-crawler."

Sherlock Holmes was about to fight a wall-crawling polar bear with frost breath. I would imagine him to be some demon bear from the Eskimo version of Hell, as the frost breath was definitely supernatural and wall-crawling is -- outside of Spiderman -- a creepy demon thing.

So I looked at my own three-card hand to see what powers I could imbue Sherlock with to fight this polar bear. Here were my choices:

"Wearing sharp stilettos." (Walking in those things is bad enough, and Holmes was no savate fighter.)

"Has no bones." (Pretty worthless against a freeze-breath bear.)

"Can teleport but goes blind for 10 seconds after each use."

That last one had to be my choice. A seemingly crippling handicap, yes, but if anyone could make up for the loss of sight with his other senses, it would be Sherlock Holmes. Hoping for a little help from the added card, I drew one randomly from the deck. What did I get?

"Can create a hologram of self."

Perfect. Holmes could teleport away and leave a false image of himself at the departure point, keeping the bear focused on the illusion for long enough for his sight to come back. The frost breath is pretty much neutralized.

The one issue I was left with was how, with apparently no weapons but his boxing and baritsu skills, was Sherlock Holmes going to kill a polar bear? 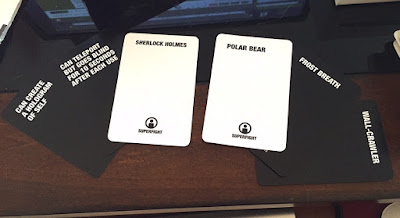 Teleport on to his back, close enough to get him in a choke hold while blind and choke him out?

I googled "Can a man choke out a polar bear?" which, oddly enough, brings up results. One story, purporting to be about a man choking a bear with his bare hands, turned out to be a tale of a man using an axe to nearly decapitate a bear. Another claimed there was too much fur and muscle for a man to choke out a bear. My own thoughts were no more pleasant as I realized that while a man can choke out a larger man with the right hold, a polar bear has claws that could rend the choking arm or leg useless in pretty short order.

The way Superfight is normally played, the two players who constructed the combatants plead their case to the rest of the players, who form a jury to announce a winner. Since this was just a test match, and no jury was present, more internet searching was in order for some hope of saving Sherlock in this match.

One uncorroborated tale told of a hunter cutting off a bear's blood flow by clamping his teeth on the bear's jugular until he passed out, then finishing him with a stick. Hmm, even if true, Sherlock doesn't have a stick. There had to be something else.

Teleporting himself a several stories in the air directly above the bear, and then plunging straight down into the bear, using his legs as spears? Risky, but with potential. Holmes could possibly finish the bear and be only somewhat crippled. Teleportation, while a powerful tool, is kind of a double-edged sword. Holmes could teleport into the bear and kill both of them, depending upon how his powers of teleportation worked. If his own molecules displaced the air or whatever at the point of his arrival, he's be a sure, if slimey, winner . . . or again, sacrifice an arm or a leg by teleporting so that just part of him wound up in a mortal spot for the bear. If medical crews were standing by, he might make it.

A little research into holograms shows that power doesn't really add any lethal effects. So we're back to the grosser side of teleportation.

Yes, teleporting, hologram-making Sherlock Holmes could beat a frost-breath, wall-crawling polar bear. It might cost him, and his survival when the battle was over might be in question, but I think I'm ready to declare him the winner.

Ready to gather some folks to actually play Superfight, now that I've given it the Sherlock Holmes test. It'll be interesting to see how old Sherlock does the next time he pops up in the arena.

Posted by Sherlock Peoria at 8:13 PM