The changing images of Sherlock Holmes and Dr. Watson. 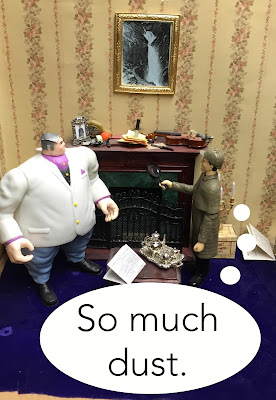 Summer doldrums can mean a lot of sorting, cleaning, and generally looking at new projects. And as I was playing with Photoshop anyway this week, it seemed time to look in on Action Sherlock and Whatever-I-Called-That-Watson again, to see if they had any new material. The answer, unfortunately, was a steady "no."

Watson, it seems, is having body image issues. Martin Freeman has pretty much messed with his head and his once-workable "I'm like Nigel Bruce, but fatter!" line just doesn't cut it now. Even Mycroft Holmes has weight challenges these days, not being allowed by TV networks to be his old insanely-obese self. ("'I am glad to meet you, sir,' said he, putting out his broad, fat hand, like the flipper of a seal." How Watson got away with writing that about the most powerful man in Britain once upon a time is far beyond our modern sensibilities.)

And Action Sherlock? Well, his height was never as great as he thought it should be, and the deerstalker and invernesse just have fallen out of fashion. Even when Benedict Cumberbatch time travels back to whatever happens in the upcoming BBC Christmas episode of Sherlock, he's wearing a top hat.

In short, what seemed like two actors who could play Sherlock Holmes and Dr. Watson only a decade ago (Hey, don't say "They're not actors, they're action figures!" That kind of prejudice against plastic Americans does not help matters whatsoever.) are now hopelessly out of fashion. Holmes and Watson have to be all sex-ay now, and Channing Tatum has a better chance at taking a Watson role than an out-of-work Kingpin action figure. (Even Kingpin isn't as fat as he used to be. But that's another issue for a non-Sherlock blog.)

As Elementary winds down it's non-Sherlock-Holmes take on someone who uses the name "Sherlock Holmes" and Sherlock produces new episodes at a pace that makes glaciers look like cars on the interstate speeding by, one has to wonder where the next fun to be had with Sherlock Holmes is going to come from. But wherever it is, you just can't predict what the detective and the doctor are going to come out as in another decade or two.

Or can you? The Cumberbatch-Freeman era is far from over, and I wouldn't be surprised if they bring Holmes and Watson to the big screen eventually. The effects of the Moffat-Gatiss vision of the two are liable to be with us a while.

But you just never know.
Posted by Sherlock Peoria at 8:49 AM