Picking up the ancient tome.

I remember as a kid seeing characters on TV and in movies do the coolest thing: pulling an ancient book from their shelves and turning pages to find just the right bit of old wisdom they needed. So this morning when I went to the shelves and pulled down that blue book with "1891" on the spine, it was hard not to get a little thrill. 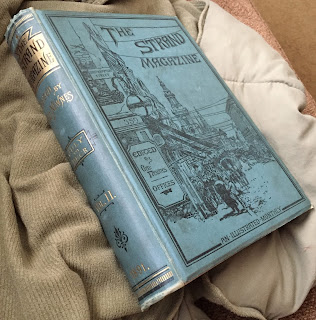 It's one hundred and twenty-four years old. Older than any human being I know. And yet, here I am, looking into this mildly ancient tome to re-experience its words for tonight's gathering of the Hansoms of John Clayton. 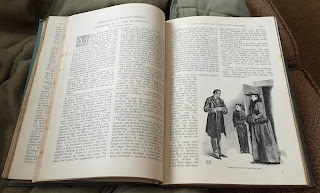 The story I read was "A Case of Identity," one that longtime fans don't usually think of as such a big deal in the life of Sherlock Holmes, as no actionable crime (at that time) was involved, and Holmes doesn't even really help his client whatsoever within the pages of the story. Yet the story is so quotable, so rich in colorful detail, that it captures why these stories have been so popular, especially since the main plot is rather wanting -- and yet it is still fun to read. 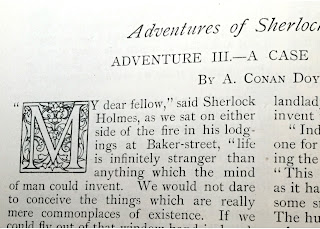 It starts with some philosophizing upon real life and fiction. Sherlock Holmes does some things we don't usually associate with him, like showing off the big diamond ring he's wearing on one hand . . . this younger Holmes liked being "pimped out" when his pal Watson came to call, showing off that ring and offering the doctor snuff, apparently, just to do a "Hey, get a look at this posh snuffbox!" move.

I've always found Holmes's words on Mary Sutherland intriguing, as there are parts that belie his supposed disinterest in woman. His line "I found her more interesting than her little problem" is usually thought to be about all the details that he rambles on about immediately after saying that. But Holmes is a young guy talking to his best buddy here. Later, when he says, ". . . it was evident that with her fair personal advantages, and her little income, she would not be allowed to remain single long."

"Fair personal advantages" has that restrained Victorian tone which makes one wonder just what a modern American male of Holmes's age and mind would have put in its place. Holmes and Watson obviously both spent a lot of time checking Mary Sutherland out in this story, and spend such an inordinate amount of time talking about her appearance that one starts to wonder what the parts Watson left out of his write-up were.

And if you think that's a little sexist, the story's ending is always the worst part: men pranking a man over something he did to a woman without seeming to do anything to help that woman's situation. Their reason?

"If I tell her she will not believe me. You may remember that old Persian saying, 'There is danger for him who taketh the tiger cub, and danger also for him who taketh delusion from a woman.' There is as much sense in Hafiz as in Horace, and as much knowledge in the world."

Wow. Nice of Holmes to be all multi-cultural, but picking up the sexist attitudes of the old Persians does not seem too progressive. He even seems pretty young to be so jaded in his dealings with the opposite sex . . . his dating life must not have gone well at all.

The "ancient wisdom" I found in that one hundred and twenty-five year old book may seem a little dated on the surface, but people now are not all that different from those of Holmes's time. We do tend to allow others their "delusions" rather than have a frank discussion at times. (How much more current would if make the quote if I wrote: "There is danger for him who taketh the tiger cub, and danger also for him who taketh delusion from a CBS Elementary fan." But I won't . . .)  There is so much to be found in any Holmes story that it is easy to garner something new out of any open minded re-reading.

And that's why we're still talking about these stories, after all this time. All fiction should be so colorfully painted, even when it's not as "infinitely strange" as real life.
Posted by Sherlock Peoria at 9:28 AM