Way back in the year 2000, I came up with a fun idea for a Sherlockian symposium presentation: Sherlock Holmes for President. His qualifications, his stump speech, posters, signs, hats, shills in the crowd . . . the whole bit. 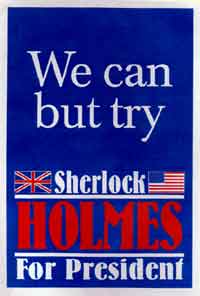 Back then, it was, as with so many Sherlockian ventures, a light-hearted lark, a bit of silliness just for fun to distract or enhance the usual campaign slog. The idea that a person most think of as a fictional character, a figure who wouldn't fit into the traditional politician role, was, at that time, a thing of sheer fantasy, a thing just for fun. And, as always, the election went forward and we voted in someone who was not as intelligent or observant as Sherlock Holmes.

Every few years when the election cycle begins again, I think of our friend Sherlock and that crazy idea. And most years, it just seems like the silly sort of party game it was.

A reality TV show character catapulted to front-running presidential candidate on a springboard of Neilsen ratings, rather than the usual political career resume.

And suddenly, I find myself going, "What's the difference between Donald Trump and Sherlock Holmes?"

Sure, one can make personal appearances. But does it really matter if one can only appear on TV with an actor standing in for him? He can still pull ratings.

Writers come up with speeches for all political candidates. Sherlock has writers galore. Image is what gains the most votes for every candidate. Sherlock has a worldwide image for problem-solving, justice, and making the world a better place. And did any candidate ever come so well pre-stocked with a running mate?

There's just one truly problematic thing about Sherlock Holmes running for president of the United States of America. He can't exactly move into the White House and do the job.

That's the real problem with fictional characters. We can get excited about them. We can rally behind them. We can even make them win a popular vote.

But in the end, we really do need someone who can do the job.

Pity, because I really think Sherlock Holmes would be an excellent choice.
Posted by Sherlock Peoria at 6:03 PM