When one is up at four in the morning with a stuffy head, sitting in front of a Sherlockian bookshelf, wondering what to do with one's self, one can't help but wonder about minutiae. What might have passed for years as an unnoticed commonplace can suddenly jump out as a glaring curiosity of an earlier era's attitudes. Take these beauties for example: 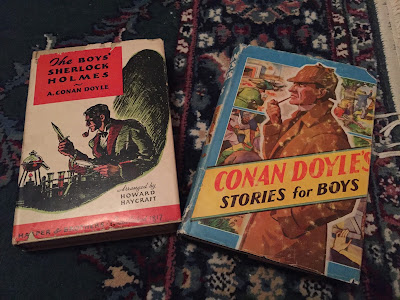 The Boys' Sherlock Holmes from 1936 and Conan Doyle's Stories for Boys from 1938. To give those books a little historical perspective, consider this fact: women got the right to vote in America in 1920. And yet, sixteen years later, Howard Haycraft, the editor of The Boys' Sherlock Holmes, and his publisher, Harper & Brothers, didn't seem to see a point in marketing Holmes to girls.

In his worthwhile opening essay to the book ("worthwhile" because it really gives a great overview of Sherlockiana at that point in time), Haycraft writes:

"A number of individual Holmes stories are to be found in general anthologies, and from time to time there have been haphazard and short-lived 'collections' of a few unrelated tales. But until now there has never been a really adequate or comprehensive selective edition of the adventures.The present book is planned to fill this need. It is intended to give younger readers their own edition.suitably priced and illustrated . . . selected for their juvenile appeal as space will permit. While the stories have been chosen with boys and their interests in mind, it is hoped that some older readers, as well, may find the volume a convenient selection to have in reach."

Haycraft goes on to say that they've left out the Mormon segment of A Study in Scarlet, as well as some details in The Sign of the Four (probably the drugs) as a part of his choices for "boys and their interests" and his other story selections are as follows: "Speckled Band," "Noble Bachelor," "Beryl Coronet," "Copper Beeches," and "Blue Carbuncle."  Apparently boys like snakes, cowgirls, jewels, and nannies.

What don't boys like, based on Adventures stories omitted? Adventuresses, gingers, fiancees, Australians, the Klan, beggars, and engineers.

Two years later, when publisher Cupples and Leon (plainly the "Peaches and Herb" of books) came out with Conan Doyle's Stories for Boys, their un-named arranger made some different choices. Boys now needed to know about the Mormons in Study, as well as the drugs at the end of The Sign of the Four. "A Case of Identity," "The Red-headed League," "A Scandal in Bohemia," and "Boscombe Valley" follow those two novels, in that curious order, like Cupples wanted to build the boys up for getting to the adventuress and the Australians.

Haycraft might call his later competitor "haphazard" as he did previous collections, but here's the thing about that set: it evolved. In 1960, that same collection was published in that same order by Platt and Munk (the "Flatt and Scruggs" of the book world) under the title Conan Doyle Stories. No gender checking at the cover. 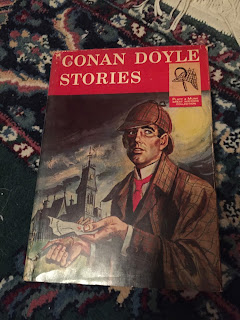 Time and attitudes move forward, leaving behind their curiously biased artifacts, though now we do still have to wonder: If a female Howard Haycraft of 1936 had been selecting The Girls' Sherlock Holmes, what choices might she have made? Would Jabez Wilson still have been left out in the cold, with ginger discrimination still in place? Would Irene Adler have been chosen over Violet Hunter? And what of those folk who come from a land down under?

But I guess we can't blame too much on the male version of Haycraft, given a little ditty by Conan Doyle himself:

"I have wrought my simple plan
If I give one hour of joy
To the boy who's half a man
Or the man who's half a boy."

Doyle, of course, did not specify what the other half of that boy or that man was, so perhaps he was far more ahead of his time than The Boys' Sherlock Holmes.

Because the times, they do change. Eventually.

Posted by Sherlock Peoria at 6:18 AM