I have always been fascinated by Sherlockian artifacts that don't exist . . . at least in this universe.

The first that come to mind are the magazine that Watson mentions in A Study in Scarlet that contained Sherlock Holmes's uncredited article, "The Book of Life." Another, from the other end of his adventures would be that small blue book with the title Practical Handbook of Bee Culture imprinted upon its cover. Reproductions are attempted, but the real thing? Never gonna get it.

So I was delighted when I ran across this gem: 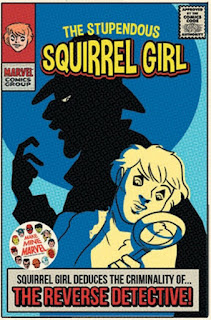 A comic book that doesn't exist.

I had to add it to my mental collection. It's from an ad within a-comic-book-in-a-comic-book in Marvel's  The Unbeatable Squirrel Girl number five from May of this year. And it features Squirrel Girl tracking "the Reverse Detective," who seems to be a very sinister version of Sherlock Holmes.

For those of you who need a current-events tie-in, Squirrel Girl is the new Netflix series character Jessica Jones's babysitter in her comic book incarnation. No Squirrel Girl in that series, of course. And no Sherlock Holmes either.

But somewhere out there in the ether, some wicked version of Sherlock is doing "criminality" . . . yeah, it's no "Book of Life."  But you know how collecting goes, imaginary or otherwise.


Posted by Sherlock Peoria at 6:23 PM