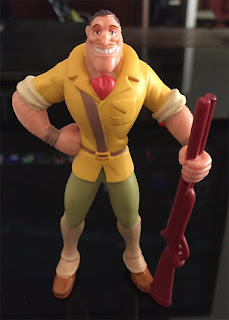 The reason for Cecil's moment in the blog spotlight is twofold: a.) The glue that held his plastic bubble to the cardboard backing of his original package had deteriorated to the point when he just had to free himself from it. And, b.) Beyond all expectations, one more attempt at a movie Tarzan is coming up on July 1 with Alexander Skarsgard as the ape-man in The Legend of Tarzan. And as our local Peoria Sherlockian society is called "The Hansoms of John Clayton,"  . . . well, we have some small connection to the whole business.

Sherlockians H.W. Starr and Philip Jose Farmer were both strong proponents of John Clayton, the cab driver from The Hound of the Baskervilles for which our society is named, being the eccentric grandfather of the John Clayton who became known as "Tarzan." This would mean that William Cecil Clayton, the toothy big game hunter from Disney Tarzan as well as the video game "Kingdom Hearts" is also the grandson of cabbie John Clayton.

Unfortunately, the name "Clayton" appears nowhere on the IMDB cast list page for the upcoming Legend of Sherlock Holmes, so both Cecil and the possible grandfather cabbie John, would seem to be disavowed in this new retelling.

Since Grandpa John (curiously, the namesake of a Peoria BBQ joint) has gotten his own movie parts when The Hound of the Baskervilles comes around every now and again, he's probably okay with missing out on this one. Poor cousin Cecil, however . . . well, maybe that toothy jerk needs to fade into oblivion, just like the glue that held his action figure's packaging together. 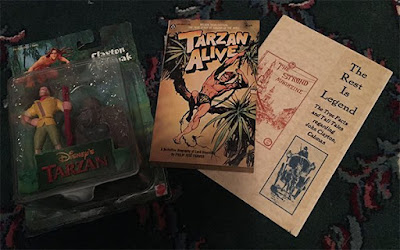 A few items of Clayton memorabilia

Posted by Sherlock Peoria at 6:40 AM