The Harmonius Order of Flies and Bluebottles.

“All you need to form a Sherlockian society is two Sherlockians and a bottle. And in a pinch, you can dispense with one of the Sherlockians.” 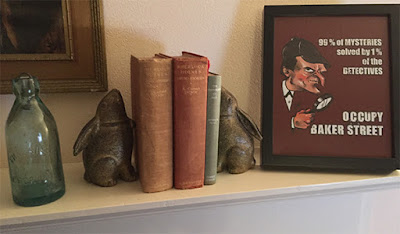 Given my true failure to organize a Sherlockian society meeting of late, this month seemed a lot like the "pinch" John Shaw spoke of many decades ago. This might be marked as my personal low-point, finally dispensing with a second Sherlockian and forming a society with just a bottle, but contingency plans like Shaw's were created by better minds than mine for, apparently, just such an occasion.

Allow me to introduce the bottle, a short-ish, green-blue glass specimen of his/her kind with
"CHAS SINGER
PEORIA
ILLS"
raised in glass letters on one side.

Chas, as I shall call him/her for short, is plainly a local.

The meeting was called to order, and I proposed the name of our new Sherlockian society be "The Harmonious Order of Flies and Bluebottles," paraphrased from "Black Peter," as I was feeling a bit fly and Chas a bit bottle. The vote in favor of adopting the name was one vote for and one vote abstaining, so it passed and our Harmonious Order was officially identified. (Not sure what Chas's issue with it was in abstaining, even though transparency is a large part of his/her personality.)

I then began the featured presentation for the night, a sonorous listing of the bottles of the Canon. Since it was the first meeting, I thought I would pander to Chas.

By the time the list was done, both Chas and I were silent and weary and the meeting came to a close.

Personally, I think John Bennett Shaw might have been mistaken about this whole bottle thing. I hope I get to socialize with some more talkative Sherlockians one day soon, within the boundaries of a society or not . . .

Posted by Sherlock Peoria at 11:54 PM