Probably would have made it to Peoria's local comic store at lunch today, but there was a birthday to be celebrated and I don't like letting any soul willing to work on their natal day go unfeted. I really wanted to pick up all of DC's "Rebirth" titles for the week, as their decision to bring back my absolute favorite comic book character has them in my good graces of late.

Unfortunately, all of the "Rebirth" number ones were bought up by plucky souls who gravitate toward such things (and luckily, don't recognize an Action Comics #957 as being of equal value). I did, however, find that Hanna Barbera reboot Wacky Raceland was out, and then there was this . . . 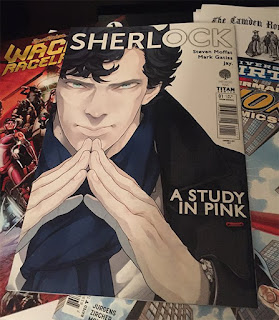 Now, in spite of there being absolutely no new story there and a $4.99 price tag, that was just too pretty to pass up. Somehow manga-style art and that Cumberbatch face were just made for each other. And it's so refreshing to see a Sherlock Holmes cover without the damned deerstalker cap.

But perhaps I'm just in a grumpy mood for missing those number sold-out first issues . . . .

Turning to read "STOP! This manga is presented in its original right-to-left reading format. This is the back of the issue!" Now, I hate to be all red-neck Peoria and all, but if comic books are gonna come to this country and steal jobs from American comic books, well they should at least have their pages in an American left-to-right order, right? Wait, wait, I'm kidding, don't go all "manga is a cultural form to be appreciated for what it is" on me. I know, I know.

But then, I still bitch because sometimes because comics aren't printed on the cheaper newsprint paper any more, instead of slick coffee-table-book pages so comic book "collectors" can be all "la-tee-dah" about the art when no comic since the death of newsprint has really been all that collectable. See? Grumpy about missing those issues.

In any case, SHERLOCK's first issue of what looks to be a six-part adaptation of "A Study in Pink," was very nicely done. As I said, Cumberbatch was made for manga art. It's a loving, no-detail-left-out presentation of that much loved version of A Study in Scarlet, and really worth the five bucks, which is about as troubling to pay for a comic to us grumbly older types as paying nine bucks for popcorn at the movies.

In the morning, I should have a less personally grumbly post, about two other grumbly aging guys, but I had to mention the happy appearance of Sherlock on the week's comic book day.