The Worst Man in the Beacon Society.

One of the seemingly harder lessons to learn in our internet society would seem to be this: If you don't agree with something, it's often okay to let it be.

To illustrate this point, I'm going to tell you a story I was reminded of last week, the tale of the worst man in the Beacon Society.

Hopefully you've heard of the Beacon Society, a charitable group that donates funds to help teachers who are using Sherlock Holmes to teach kids. This year was a good year for the Beacon Society as they gave out ten grants to deserving teachers and were again an official charity of Atlanta's 221B Con, raising money in a most delightful way.

The name of the group comes, of course, from "The Naval Treaty," in which Sherlock Holmes tells Watson, "Look at those big, isolated clumps of buildings rising above the slates, like brick islands in a lead-colored sea . . . Lighthouses, my boy! Beacons of the future! Capsules, with hundreds of bright little seeds in each, out of which will spring the wiser, better England of the future."

(Oh . . . he thought, suddenly stopped in his tracks . . . maybe not such a good quote to demonstrate Holmes's smarts after the whole Brexit thing . . . .)

The Beacon Society began in 2003, on the second floor of New York's Algonquin Hotel, where the energetic Maribeau Briggs had summoned a number of Sherlockians to discuss energizing future generations with the spirit of Sherlock Holmes.

The Sherlockian world of 2003 is very hard to imagine these days. Sherlock was not on the rise, in fact, the fandom seemed to be in a slow descent. The bump of the Jeremy Brett Granada days was well past and Benedict Cumberbatch was played the sex-obsessed son of Hugh Laurie on Fortysomething. ("Y'see, kids, back in them ol' days, Sherlockians didn't even have House to watch yet. You know House . . . that Sherlock Holmes show we watched when we didn't have any Sherlock Holmes shows? What, you're too young for that, too?" Ah, time.) Perhaps the biggest thing happening to Sherlock Holmes in 2003 was his first kiss with Mary Russell, to which I was immaturely shouting, "Ewww, gross!" befitting my usual mental age.

In 2003, Sherlockians were painfully aware that Holmes needed a push in our culture, and nobody knew where such a push could even come from. So when Maribeau started rounding up Sherlockians she thought might benefit the cause, asking them to come to the second floor of the Algonquin to discuss helping Sherlock Holmes gain some future momentum, a lot of good and helpful Sherlockians showed up. Along with one or two who would not be so helpful.

As the plan to abet school teachers in teaching Sherlock Holmes was explained, at least one fellow in that gathering started thinking back to reading "The Speckled Band" in an eighth grade classroom and  mentally went, "That sure didn't take. This does not sound like a good idea." He firmly believed that school teachers weren't going to do the job, and had thought the meeting was going to be about coming up with a new way to promote Sherlockian enjoyment to the general adult public. And so he and his companion, who was also present for that initial gathering of the Beacon Society, quietly walked away and didn't really get into it. At least until 2015, when he donated $15 to the Beacons to see a burlesque show at 221B Con.

Now, a good thirteen years later, the Beacon Society is enthusiastically doing good work, helping teachers at a time when the rest of society is often not all that helpful to that much needed profession. That fellow who walked away from the Beacon Society thinking it was a wrong-headed idea just let it be, didn't argue the point on the internet, and then later might have been shown the error of his ways by the fine folk who did carry that noble cause forward. Just because you don't agree with something completely doesn't mean it might not have merit. (Hush now, Elementary fans. Everything isn't about you.)

Having said that, I'm going to out the worst man ever thought to be in the Beacon Society, whom you will see in the photo below from the society's web site. A further clue . . . he's the one highest in the photo, an ironic non-beacon rising above the slates, to borrow from the "Naval Treaty" quote. Be nice to him. He still might get his shit together one of these days. 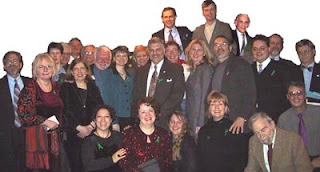 Posted by Sherlock Peoria at 9:54 AM