One of the benefits of a wild and carefree collecting youth is that eventually, enough time passes that it all becomes new again. Not "new" as in "not old," no, "new" as in, "I don't remember seeing this before or knowing it was here until just now."  And then, if you're lucky, you remember somebody like Ralph Hall selling it to you at a conference, from which you came home with so many other things that you shelved and forgot a thing or two.

Ralph Hall, if you never met him, is one of those fabulous collectors whose skills in that area are such that his cast-offs are things to behold. Which is how I came to own a book with an authentic Sherlock Holmes autograph inside the cover. Here's the proof: 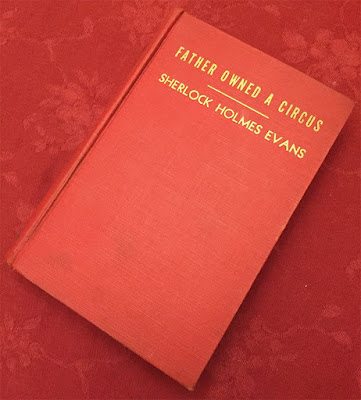 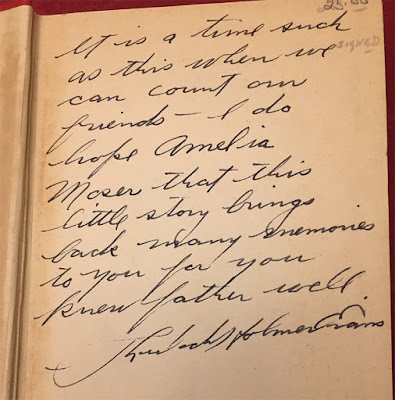 I'll let you read the brochure at the University of Iowa yourself from the link above, it's quite the glorifier of Mr. Evans as an after dinner speaker. Lines like "Keenly balancing delicacy and provocative frankness, the crisp narrative paints flesh and blood people in the intimacy of their dressing room." make it seem like he's trying to sexy it up, but the titles of his speeches, like "Male Superemecy (sic) and the Little Woman" ("Good for ladies night.") and "Angels Never Marry" add an extra "hmmm . . ." to just what direction he was headed in his comedy.

A lawyer, author, and actor for both radio and stage, Sherlock Holmes Evans got his name in the most fannish way possible. After naming their first son "Alger," John and Martha Evans (Could you have a more perfect couple to birth a "Sherlock?") had some bad luck that left John burned and jobless after a livery stable fire. While recovering, he and his wife saw William Gillette playing Sherlock Holmes at the Massillon Opera House in Massillon, Ohio. When their next son was born, on March 4, 1906, he got the name of the play and the main character, Sherlock Holmes Evans . . . "an awful thing to do to a defenseless baby," according to the baby himself.

One can find that Sherlock Holmes Evans passed away on January 1, 1987, but Google-searching that name makes him a veritable needle in a haystack of Sherlock Holmes. We can guess he self-published Father Owned A Circus in 1951, as his name is on the copyright page and Dorrance & Company was known for such work, but his speaking flyer says it was also published in several languages. But that's about it . . . no Father Was Named Sherlock Holmes was ever published to record his deeds as he did his father.

Worth putting Massillon, Ohio on a great cross-country Sherlock Holmes road trip? Well, there are explorations here yet to be had.
Posted by Sherlock Peoria at 10:13 PM