"We are faddy people."

There are, perhaps, those who would suggest that Sherlockiana was a classier joint in decades past, before the Cumberbatch came to call. Take the 1980s, for example. Jeremy Brett was appearing on PBS doing Canon-faithful adaptations of "The Red-headed League," "The Copper Beeches," and "The Final Problem." All class, right? 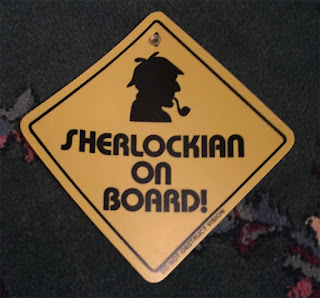 The "SHERLOCKIAN ON BOARD!" sign. All caps with an exclamation point in that diamond of cautionary yellow.

There were a lot of those signs back then, based on the "BABY ON BOARD!" sign that someone saw in Germany and brought to the U.S., preying on that always-caring maternal market. You didn't want someone to choose to crash into your car if your baby was in it, after all. It was a couple of years before we had the term "road rage" yet, so the thought was that apparently, rational drivers would make the proper choice and avoid crashes with vehicles carrying babies. (Yet it came just about the time all fifty states had car seat laws put into place, so babies in cars were just on people's minds.)

Parodies followed, which was an odd thing considering child safety was the issue being parodied, and at some point late in the game, someone decided people might not want to crash into cars that held Sherlockians in them either. After all, we were all watching Jeremy Brett and, hence, worth of such no-crash considerations. Or, since 1985 was also the year Young Sherlock Holmes came out, maybe we were hoping the association of his baby-face would cause people not to crash into us.

As you can tell by the non-sun-bleached aspect of the one in the photo, my "SHERLOCKIAN ON BOARD!" sign never saw use in a car's back window. It was just another Sherlockian collectible picked up in an era of extreme collecting. And I think it puzzled me then as much as it puzzles me now, being based on the sort of humor used in the weak-tea likes of Epic Movie, Date Movie, and Disaster Movie where "Look, this thing is like another thing!" seems to be all that the makers think will bring hilarity. But perhaps its just an artifact from an alternate universe we've never seen.

Is there a parallel universe where "SHERLOCKIAN ON BOARD!" signs denote useful information for the regular folk to call upon said occupant of a vehicle to solve mysteries if they happen to be on the scene? Or dispense wisdom from the Sherlockian Canon as needed, or just desired?

"Look, Mom! There's a Sherlockian on board! We are saved!"

But who was ever really "on board" a car anyway?

Pardon me, I have to go listen to Vivaldi's Four Seasons, raise my pinky, and be all classy for a while. Being an elder Sherlockian takes gravitas, after all. Because we have to seriously work on forgetting parts of the 1980s.
Posted by Sherlock Peoria at 11:27 PM