Another fun day on the ol' Twitter, where the fuss and the counter-fuss spool up for a given newsbit. My favorite among today's early contenders: 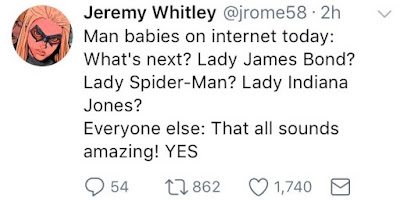 Doctor Who is going to be female in the next go-round. Unlike Sherlock Holmes, the Doctor is still a single-thread-continuity character, so the impact of his transition might be felt a little harder by his fans, but we all knew it was a possibility. So let's get back to Sherlock Holmes.

Just how would Sherlockians react to a full-fledged, major media female Sherlock Holmes? We've had some pretty great versions done on YouTube and elsewhere, but they weren't at the Downy/Cumberbatch/Miller level. And don't give me the "Well, Watson has been a woman!" excuse for Sherlockians being accepting. Watson has been Nigel Bruce. Sherlockians of the past have shown that they pretty much would accept a pig as a Watson if you keep your Sherlock close enough to their image of the Master Detective.

But here's the thing about re-works, reboots, and re-imaginings . . . you can do ANYTHING and get away with it if the writing is good enough. ANYTHING. The problem we see consistently, especially in sequels and reboots of known properties is that the writers think they can slap a deerstalker, a pipe, and a few weak observations on a detective and he's Sherlock Holmes. Writers use successful known characters as a crutch, don't work at real characterization, motivation, or plot quite so hard, and the result is pretty awful.

But take something like Battle for the Planet of the Apes or Westworld (both done in 1973), give them to some thoughtful writers and talented directors, and you get something so much better than the original that an audience doesn't just accept, but welcome it. I'd propose that BBC Sherlock was much the same . . . taking the thought of Sherlock Holmes in the modern day, which had been tried many times before, and doing it so well that it never seemed like there was a question.

It's this part before we see the story that's so rough for some people. They just can't imagine anything besides what already is. And from my own experience, I definitely know that there are some things you don't want to explain to people before you can show them enough of the finished work, so that their mind can actually see the thing and go, "Yes, that's a great idea!" Letting a limited imagination try to fill in the blanks on anything is risky business, and on a creation that they're only given a single fact on, like a female Doctor Who, it's nigh impossible to get their buy-in. They only know what they know.

Changing Doyle's Sherlock Holmes into something other than a Victorian white man isn't a taboo, it's just a creative challenge, a test of the imagination, both for those who currently dream of it and those who will inevitably accomplish it in the mainstream. (And great kudos to those who have already achieved that goal out of the mainstream.) One day it will come, just as surely as Johnlock and every other potential Sherlock of worth.

I have more faith than ever in the creative arts these days. I just wish we could get our crap together on more practical matters.
Posted by Sherlock Peoria at 1:39 PM