My newsfeed on Sherlock appears to have a bit of a battle going on this morning between The Smithsonian and The Washington Post. 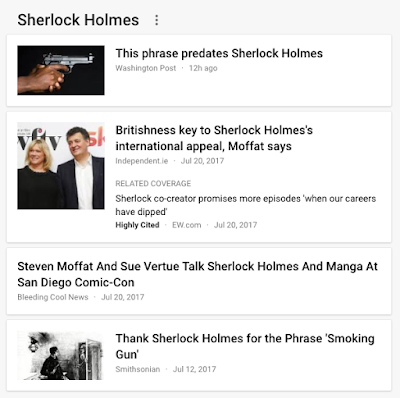 The Smithsonian has been pushing an article all week that the Holmes Canon is responsible for the phrase "smoking gun," which seemed trivial enough that I never bothered to read it until this morning, when The Washington Post online decided to start arguing the point. And now that I've read both? They're pretty much pointless hoo-hah.

"Smoking gun" as we use it metaphorically means indisputable proof of someone's guilt. It's a metaphor. It doesn't mean the guilty party was actually caught with a smoking gun in their hand. Yet apparently, in 2003, word-guy William Safire wrote that the passage in "The Gloria Scott" where "the chaplain stood with a smoking pistol in his hand at his elbow" is where that cliche comes from.

Conan Doyle and Sherlock Holmes get credit for a lot of original things, but trying to give them their due for "smoking gun" in this instance seems flat-out silliness. IT'S A METAPHOR! The guy that first used it as a metaphor is the one who gets credit, not Doyle, and not, as the Post carries on this ridiculous argument, any prior person who wrote about gunpowder smoke coming from any projectile firing weaponry.

Posted by Sherlock Peoria at 7:42 AM