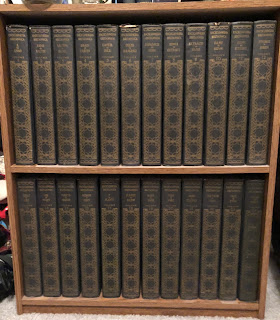 I realized this tonight, looking at the heaviest set of books in the house, a set of Encyclopaedia Britannica from 1938. Why do I own a non-Victorian set of encyclopaedias?

Well, many's the Sherlockian  who knows that it's a later edition of the books that Jabez Wilson was asked to copy from in "The Red-Headed League." That edition -- possibly the ninth edition, if the schemers didn't just go cheap like I did and get some cast-off earlier edition -- is a true Canonical artifact.

But given that one of the proper vintage would be a little hard to find, when I found the 1938 at a bargain price at the local museum book sale, it seemed old enough. And what did I do, just as soon as I got it?

Started hand-copying the text, of course! And timing myself, to extrapolate just how long Jabez Wilson took to make it as far as he did. A simple, yet fun experiment in re-creating Canonical events, which many a Sherlockian has done. It never seemed like that odd a thing to have.

Until now, of course, when bound encyclopaedias have been replaced by electronic versions, and one thinks, "Oh, this is now rare and unusual!" But NO!

A simple search reveals that Britannica still sells a hardbound copy of their work . . . and it's a reproduction of the 1768 edition. Which makes you wonder: Will there ever be enough of a market for a Jabez Wilson reproduction edition?  At least the volume with the letter "A" in it, since we know Wilson made it no further than that. Probably not, it's sad to think.

So until then, I'll just have to content myself with old 1938. It's good for flattening something every now and then . . . and still, the occasional dated info look-up.

And the momentary thought of old Jabez Wilson.
Posted by Sherlock Peoria at 12:09 AM