A mission from Doyle's Rotary Coffin

We all know how easy it is to proclaim our values for the world to see, but actually going out of one's way to put those values into action . . . not always so easily done!

Tonight I found my own values put to the test as I undertook a mission for Doyle's Rotary Coffin, that swarming society whose members have vowed that "No Holmes barred!" is the way to live a proper Sherlockian life. The group's current project, a defense of the "35 Worst Films" as called out by slashfilms.com, is working to mount a defense of each of those thirty-five films. As no single human mind could bear such a task in a short amount of time, the DRC has been looking for volunteers to man the parapets. I stepped forward this morning, and was assigned 1990's Hands of a Murderer, a film that I remembered being horribly disappointed in back when it came on network television.

I had enjoyed Edward Woodward in The Equalizer, but his Sherlock Holmes had seemed somehow less British than his CIA agent in that show. And John Hillerman's Watson seemed at that time like he was still talking to Thomas Magnum instead of Sherlock Holmes.

But almost thirty years gives a person some perspective, and after learning to appreciate such films as the Asylum's "Sherlock Holmes and Dinosaurs" as it came to be called (real title Sherlock Holmes), The Hands of a Murderer was now chock-full of unexpected charms.

Colorful characters, borrowed details from both the Canon and Rathbone movies . . . Woodward's stockier-than-normal Holmes was more than made up for by all the rest of it. And I'll leave more than that to my defense over at the Doyle's Rotary Coffin site, which should be appearing there soon.

Edward Woodward's Sherlock Holmes did not get barred this evening, and Doyle's Rotary Coffin has triumphed yet again! May many another victory lay ahead for its battle against stockaded Sherlocks. 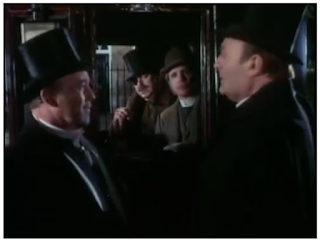