So sayeth the blogger at this time each year. It's an impossible dream, and yet hope arises phoenix-like from the ashes of the last attempt. So here we go.

Registration starts at three, hit that quick, run into a few more friendly faces. Bade ribbon swap begins at four, get there on time, start handing our "Doyle's Rotary Coffin" badge ribbons to anyone who'll take one and gather any ribbons and pins that seem to work for me. (Big secret: I'm a ribbon slut. If you have a "Thrawnster" ribbon, my Star Wars fanboy comes out. Got Hogwarts house ribbons, "RAVENCLAW" is close enough. "Baby Bumble Bees?" Babies are cool. And the Marriott floor bacon is mysteriously fascinating enough that "All Hail the Bacon Stone" is going right on my ribbon train. (And button-wise, I ship Sherlolly, because it's so painfully close to Canon. And, come on, it's Molly!) The handcrafted 221B wallpaper with smiley face is especially nice. 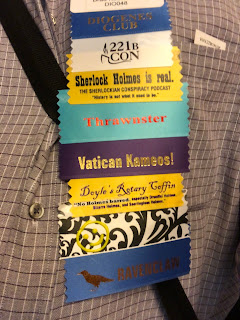 Five o'clock brings the opening of the dealer's room and a quick trip through to pick up a con shirt, new lanyard, and the new graphic novel Change of Pace by Kelley Fesmire, an artist whose Sherlock and John have a definite Disney cartoon vibe. Then off to big Salon E for "After Canon Ends" a panel on how fandoms survive after their source material ends. The problem with coming in late is that you don't hear the names of the panelists, but I do see Jacquelynn Morris up among the trio -- she's a special guest of the con this year and doing a whole of of panels. The talk ranges from Firefly, Twin Peaks, Battlestar Galactica, and, of course, the Sherlock Holmes Original Canon and BBC series. What makes a narrative something we want to continue? Is it the lack of a good ending? A lot of teased untold tales?

Oh, multi-tasking got me -- Jacquelynn called on me to supply the name of the story with Watson getting shot -- luckily, those in the rows ahead of me called out "Three Garridebs" while my brain was still shifting gears. (Yes, I'm blogging during panels. The wi-fi is strong with me this year.)

The "Sherlock Holmes Is Like" panel starts up with editor Christopher Redmond and panelists Nea Dodson, Courtney Powers, Amy Thomas, and Carlina de la Cova, and as many contributors in the audience. (Ashley Polasek, Lee Vann, Steve Mason, Christopher Zordan, and yours truly.) Chris Redmond gives us the origins of the books, the characters he hoped to get, but didn't (Scarlet Pimpernel and Dracula -- two great ones). Carlina goes back to Holmes's origins with Vidocq, Amy Thomas points out how we can about relate anyone to Holmes (Hermione Granger was hers), Courtney's baby brought her a character (Alexia Tarabotti), and Nea goes down an unexpected road with Quantum Leap  and Holmes, hitting feminism. And then Nea bounces it into the audience panelists and I need to stop typing. Back soon.

Well, getting called to speak on something you weren't prepared for is a tricky business, especially when you tend to forget your own writings. The other writers in the audience did very well, and I kept it mercifully brief. A question from the audience about favorite essays of each of ours gives me a chance to refer to my blog competition. At little attempt at book signing before we get kicked out of the room and it's into "Arthur Continuity Doyle" where Ashley (a.k.a. Baker Street Babe with swords), Amy (a.k.a. Baker Street Babe with a pen), and Cindy (a.k.a. rabidsamfan) are holding forth.

Cindy hits their changing habits, Amy hits the meme around the "John/James" Watson issue, and Ashley starts with "the game is played in the gaps." A lot of back-and-forth and Amy comes out with her fresh take for 2019 -- Doyle commenting to a fan about the fan knowing more of Holmes than he did. They're going some good and interesting directions this year, from Doyle's perspective, Watson's perspective, Holmes's perspective, details that appear once and never again, like baritsu/bartitsu.

Ashley's Scottish Conan Doyle impression is very Mike Myers, by the by: "I'm gonna teach Great Britain to ski." (Hard to reproduce in text.) Baring-Gould and almanacs leads into a chronology moment, but Watson being called James by his wife is a perpetual fan favorite, and we get there, and the lively continuity chat ramps up.

Ooooooh, the pattern of The Valley of Fear being similar to A Study in Scarlet is used by rabidsamfan to explain an excellent theory as to why Watson didn't know of Moriarty in "The Final Problem," when he obviously did in VALL. The Valley of Fear was a "trunk fic" that remained hidden away for twenty years after being written so much earlier. That connection between the two novels is a very nice basis for theory.

Break for rest, dropping things in the room, snacking, run into people, chat with people, eventually drop in late on the only panel with an open door: "Drug Use in the Victorian Era." They used a lot of drugs in the Victorian era, and poisoning by lead and mercury, not that uncommon. Maybe I should've ventured into a closed-door panel where laughter was loud and long. But learning was had, whether my shallow Friday night self wanted learning or no.

But on we go the the burlesque show, where all is lively and gay. (Old-timey gay, but hey, we cheer for both sexes at burlesque, so make of it what you will!) The Nerdlesque troupe that performs at 221B Con always has some surprises, and perhaps the most surprising this time was an innocent little hobbit transformed into Gollum by the One Ring, burlesque-style. When Mycroft Holmes came out and announced that he wasn't Ron Weasley this year, I was a bit disappointed, as Ron has always been a favorite since his first surprising appearance a few years back, but Mycroft eventually gave in and cosplayed Ron Weasely with a Hermione who seemed to have taken lessons from Irene Adler in domination. Female Sherlock and brother Mycroft hosted the whole affair, which wandered all over nerdy creation in Sherlock's hunt for Moriarty, and those Holmes boys make a great comedy team, even if one of them is a girl.

A trip to the bar for a "Red Claw" drink bag, and the evening starts to wind down. Did I hit it all? Of course not. Sturdy is the butt of any who could, if not for needing to be multiple places at once. But 221B Con is off to a grand start, and I now know where the floor bacon is, which completely baffled me last year. (And also about the egg chandelier, thanks to a helpful tip.) Somewhere a dance party is still going on, well after midnight. Boy, I wish we had those in the 1980s.

221B Con is a magical place, to paraphrase the ever-late, but somehow still functioning Phil Coulson. The late arrivals have made it in, one very notable regular is absent, and the biggest day of the con lays ahead. This will all end far too soon, but its a grand ride while it lasts.

Posted by Sherlock Peoria at 11:16 PM