With so brief a window as a weekend con, little things can start making a difference. An uncomfortable bed can cost you sleep, make you take time to change rooms, and cost you a panel or two. And, actually cause you to become a little more social because you can't sleep and wander down early. I say "you," but this is actually all about the first part of my day. That bed was just vexing me.

Spending what quickly becomes hours comparing notes with fellow Sherlockians is never time wasted, even if you do miss an opportunity or two for other potential happenings. And nobody wants to give up on a good conversation if responsibilities aren't forcing you to. I'm not going into detail here about what went on in those conversations, as I now have more blog content for a month or so, once my brain settles down and processes all the input from this weekend.

But eventually I wandered into an AU panel, to see what alternate universes of Sherlock and John are up to these days, but lack of sleep quickly started hinting it might be time for a nap . . . which the torture bed was not going to allow. And at noon, my first panel-participation of the con came due for "Unreal Podcast," about doing a fictional podcast, which I was worried I was too tired for. But Mary O'Reilly is a great co-panelist, and our corresponding traveling companions many a great audience, so the panel was actually, engaging and lively enough to make me forget how tired I was.  (Of course, no one else was their to bear witness to all that I've said above, and I'm now worried that a member of the con team is going to show up with a hood and compound bow, going "YOU HAVE FAILED THIS CON!" in a husky Arrow voice. But it really suited my podcast journey, and we did have fun.) 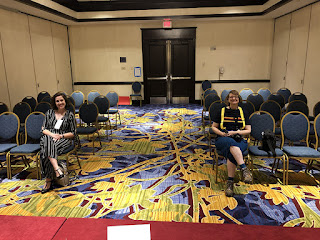 The need for food cut into my next set of panel choices, three of which would all have been fun. But add swapping out rooms to that need and missed almost all of them, barely got into the dealer's room to pick up Howard Ostrom's beautiful new books at a bargain price. 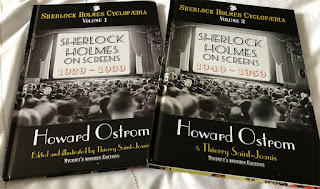 Looking for Howard earlier, I had already gotten myself a special treat -- a set of Fox Estacado's Sherlock prints, which are some of my favorite pieces of fan art. 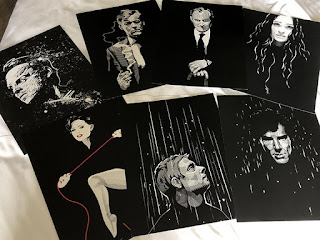 An informative meeting about a particular Watsonian responsibility to come followed, but after that it was time for a little fine cinema: The Adventure of the Furtive Festivity. The short film about Watson planning a surprise birthday party for Holmes was especially well cast, written, and produced -- a really good film -- and the packed viewing room loved every minute of it. The con admins smartly schedule one more showing tomorrow in the largest room at the con, and I'm sure there will be a number of repeat viewers. Think a classically more mature Holmes and Watson couldn't be gay? The Adventure of the Furtive Festivity creates its Baker Street reality so well that seeing them as a couple comes off as naturally as anything we've seen in an extra-Canonical movie. It will be coming to YouTube later in the year, and when it comes, I'd highly recommend it. One day the short film will probably be seen as one of the forebears of full-fledged Johnlock on-screen couples being accepted by audiences.

After that, a room break . . . time here to sing the praises of events totally held in a single hotel. Nothing beats the ability to retire to one's room for an hour or so to recharge during a long day of Sherlocking. We do love our hobby, but one needs to refresh for the long haul on occasion -- and Saturday at 221B Con is indeed the long haul.

Back down in time for the costume show, though. One of 221B Con's thoughtful choices over the years has been to take the competition out of cosplay -- an act which doesn't seem to have hurt the number of people willing and able to costume up for the annual cosplay show. Hosted by Marilynne McKay as Queen Elizabeth, the costume show always rolls through all too quickly, but is the best display of the con's diverse nature all in one event. Costumes range from the pure Victorian dress to the cartoon character with everything in between, each displaying some love of the wearer. 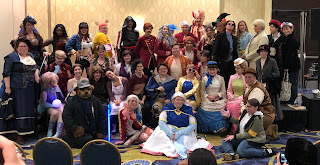 At this point, I had intended to go to "World-Building for Writers," but the "Geek Vs." podcast game show was on the way, and I can't resist a big spinning game show wheel, nor Tony, the happy host of that podcast, and the hour that followed was a total party. Both sides of the panel room competed for cookies, battling on trivia, charades, pictionary, word clues, and Sherlockian knowledge. Having con-master Heather Holloway on our team really raised the level of our teams spirits about as high as they could go, and we pulled off some amazing moments of trivial triumph. Holmes-work from knowing the twist in The Last Sherlock Holmes Story to finishing an RDJ movie Holmes quote were all in our wheelhouse, but my favorite win was having to get my team to say the word "throb." This being 221B Con, I knew immediately that only two words would get that job done: "Pulsing" and "penis."

The Girl Scout cookies which followed our win were the tastiest of their kind -- the cookies of success! From there, it was on to the "Freaks in Love" kink panel, which I basically walked into blindly based on who the folks at the panel table were. (The one flaw with 221B Con panels is that the con thoughtfully doesn't put people's names on the panel schedule, which protects the speakers on more personal topics, but also makes one occasionally go "You spoke on that? How did I miss that!" But it's a good policy, despite the cost.) Anyway, the panel that followed was a good mix of fic and reality that didn't get too kinky, but had plenty of good tips for the attendees filling the room.

Another quick trip upstairs to the room, and back to arrive late for "Parodists, Imposters, and Pretenders," where I finally got to see Howard Ostrom on a panel with Shana Carter, Ashley Polasek, and Amy Thomas, as they discussed Holmeses who aren't Holmeses, covering a whole lot of ground.

That took me up to ten PM, at which point, I went off the official schedule grid to the hotel bar, where @221BCrow was organizing a trivia quiz created by the non-present Margie Deck. We ordered drinks and a little food -- I got a massive pile of calamari and yet another order of the hotel's great macaroons (not the cocoanut kind) which got shared. (Also, who deep-fries lemon slices with their calamari? That led to one really weird mouth-experience.) Anyway, the trivia was just about the right level for the current mental state of all involved -- even things that would have been too easily known for an alert daytime Sherlockian where fun to guess at.

Following the trivia just came generally wonderful conversation, including a confession from a hate-reader of this blog during my dark anti-Elementary days and my apologies to said reader. (Sorry, all the rest of you who've stuck with me or come back at some point!) A couple of us may have tried a bit too hard to sell Olivia on Holmes and Watson, but when the evening ended with a request from someone else for all the lyrics to the musical finale to that movie, I had to count my Saturday as complete. (And was transcribing lyrics off the close-captioning to that movie immediately when I woke this morning.)

Anyway, on goes the Con, always getting better and better as we head through the weekend. And now, Sunday, the happiest . . . and saddest . . . time of the con, as we wind through our final day.

Posted by Sherlock Peoria at 8:42 AM