The question of Holmes's hair

It's not often that, after forty years of Sherlocking, you run into an aspect of Sherlock Holmes that baffles you, but the matter of Sherlock's hair color has left me completely adrift. A twenty-four hour Twitter poll to test the Sherlockian waters resulted in a predominate opinion of "black," but I'm still not even sure where people are getting that. 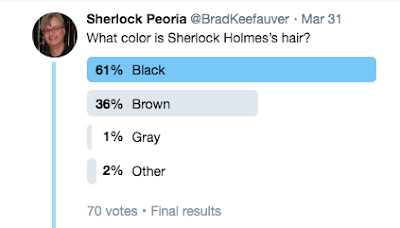 Sure, it may look black in some Paget drawings, but since they were black and white drawings, the choices were black, white, and gray. And movies aren't any help, because Holmes's look was first firmly footed in black and white movies. One hardly knows what color Basil Rathbone's hair was, though one picture I found of him at age three definitely looks like a lighter shade than black. Perhaps the best answer on Twitter came from HarryWatson1988, who delved into Holmes's ancestry, along with an even more pertinent fact:

I think the phrase "like mine" is more telling than "very dark brown," as I suspect my own sense of Holmes's hair is based on my own hair color. Just as Sherlockians have written on Holmes's religion being like their own over the years, our identification with the great detective often imbues him with touches of ourselves. And it's not like Watson was any great help on the matter, as other than that weird "black top-knot" bird comparison in "Dancing Men" that raised this issue, I can't seem to find him mentioning Holmes's hair color anywhere. You'd think if he were that in love with the man, he'd at least have described his lustrous locks at some point.

We do know Holmes's eye color, though, so you have to give Watson that.

But this hair thing -- as black hair is the stereotypical shade of villains and evil twins, I wonder how many folks who consider Holmes's hair to be black see him as a sort of person with evil ways he uses for good. Basil Rathbone definitely had black hair in his villain roles, and it was that same look which made him a good Holmes -- Sherlock has never been a fair-haired hero sort, though the occasional actor tilts him that way: Roger Moore, Nicol Williamson, Ronald Howard, perhaps? Benedict Cumberbatch, even? Basil of Baker Street definitely didn't have black fur, that was a Ratigan thing.

But we shouldn't be color-judgey of character here. The black hats/white hats thing went out long ago, if it was ever really here at all.

I think Trudy Holtz suggested the best answer, in wondering if Sherlock Holmes used tinted pomades in his disguises:  Sherlock Holmes's hair was whatever color it needed to be.

And I suspect that holds true for his many fans as well. Sherlock's hair is whatever color it needs to be in our minds to create our perfect headcanon Holmes, whatever ingredients we build that character from.

Now just don't ask me if the carpet matched the drapes, because I'm not going there . . . though someone surely has at this point.


Posted by Sherlock Peoria at 6:14 AM