One of my new favorite forms of collecting

Every Sherlockian collection has mini-collections within it, and when a catalog came in the mail today from my badge ribbon supplier, it reminded me to take a minute to appreciate one of mine.

With all the hustle and bustle and rampant delights of 221B Con each year, I never really take the time to sing the praises of the Sherlockian collecting opportunity that only occurs that time of year for me. If it happens elsewhere, at the level it does there, I've yet to hear about it, so if I'm missing something, please let me know. And that collecting opportunity is this: Badge ribbon collecting! 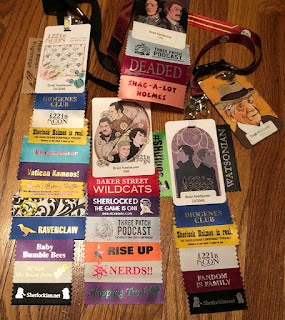 I have to admit, I'm in the minor leagues when it comes to 221B Con badge collecting. The best collectors pay attention to Twitter, hit different con suites when new ribbon alerts come out, track down ribbons they've seen on someone else, etc. I've almost doubled my number collected with each passing year, and I still don't come close to the long, floor-trailing ribbon neck-ties I've seen on the true collectors. But there's still a lot of joy, even in a small collection. And memories.

Badge ribbons can remind you of who you saw at the con that year, what was the popular non-Holmes fandom that put in an appearance, what thing was being promoted, and what that odd little panel in the most curious corner of Sherlockian interest was. Sometimes it's just the happy moment of meeting the person who gave you the ribbon. In my little collection pictured above, I see all of that when I look at those ribbons, including the "What the hell was I thinking?" year of no ribbons.

Collecting has been a part of Sherlockiana as long as there has been Sherlockiana, and the opportunity to spend a weekend collecting the one thing you can only collect during that three-day period . . . well, it makes for a very special little collection within your Sherlockian collection. This year was my first year starting the con at the ribbon swap, which occurs almost as soon as we have badges to put ribbons on. (It's called a "swap" but a lot of folks are just happy to push ribbons at anyone who doesn't have one of theirs. Like me, 'cuz nobody was going without a Doyle's Rotary Coffin ribbon this year!)

Next year it might be fun to start learning the tricks of the true masters of ribbon collecting. But in any case, I'm just thrilled when something new turns up in our Sherlockian bag of tricks and this one is definitely a recent addition to the things we Sherlockians do to celebrate Sherlock.

I hope it goes on long enough that eventually someone is doing recreations of classic ribbons from those early Sherlockian cons of their youth.
Posted by Sherlock Peoria at 8:57 PM