Sometimes, you just get to sit and look at the things that fill your Sherlock spot.

Any gathering of Sherlock Holmes objects tends to represent a journey, as once your love of the detective and the doctor becomes an active and known pastime, the pair start coming at you from out of the woodwork. And, as a result, just like the cursed objects in Ed and Lorraine Warren's locked trophy room, there is a magic and a story behind every item. (Yes, I'm referring to the characters from the Annabelle movies. And I actually attended a lecture they gave in Peoria in the 1980s, so, like Sherlock Holmes, they do have a certain reality outside the movies.)

Wow, that's a lot of weird build-up just to talk about these two rather unique items. 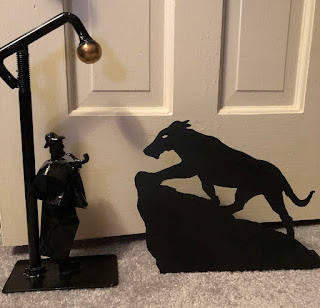 Each of these was a gift from one of my brothers.

The Sherlock is a neat piece from one's art-welding period, the Hound of the Baskervilles a special favor one had a friend with access to a computer-guided metal-cutting machine. There's a three and a half foot tall version of that hound that I'm dying to find a way to put on the peak of a roof like a reindeer for some Halloween.

I don't know what sort of image(s) my brother used to concoct his Sherlock Holmes, but it's a lovely little piece in that it's not like anything else. The Hound, however, has very specific origins.

When St. Louis Sherlockian societies were teaming up for an event called "Weekend at Baskerville Hall," a logo was needed and I fussed with a piece of panther artwork and turned a cat into a dog. The image appeared on tote bags, programs, and the podium, thanks to an ad agency friend who was creating some marvelous bits for us back then. (His sixty story "Wheel of Sherlock" was something I wish I had talked him into letting me hang onto -- it was a beautiful thing where spinning the sixty stories would bring one up in Basil Rathbone's magnifying glass, and would impressively grace any Sherlockian game show, as it did back in the day, even now. But I digress.

Which, I guess, is where I started this ramble, from just looking at my shelves a little too long. It's been quite a journey with friend Sherlock, with, hopefully a lot of goodness left to come.