Odd that I've been to Watson, Oklahoma, but not Watson, Illinois.

The Oklahoma Watson was part of a grand tour organized by the energetic Don Hobbs, who was recognized in that village, even as we gazed upon the "Watson Tigers" team logo on the side of the local elementary school, closed for the summer at that point.

Watson, Illinois . . . well, thanks to Google's street view, I now know this much about it: 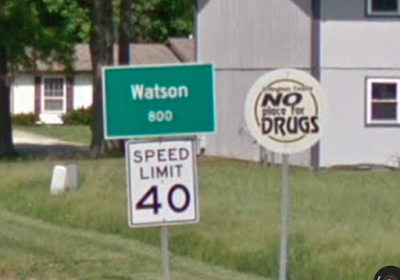 Watson, quite appropriately, is "NO place for DRUGS."  Brandy, however, is something they surely look more kindly upon, I would bet.

My friend John Holliday had started planning little jaunts to nearby towns with Canonical names to see what related Canonical details he could find in those towns. (And in a town this small, it can be pretty tricky.) And I'm pretty sure this one is in his sites, so I'll have to check with him on that soon.

As with Sherlock, Texas, the spot on the map that turned out to be just a railroad switching point on that previous Hobbs tour, Watson, Illinois finds its origins in the railroads as well: The town is named after a railroad official named George Watson.

All very tangential to the subject of Sherlock Holmes, I know, but as the Watsonian Weekly podcast continues along its merry course, I have a feeling I may be winding up in a few places I didn't expect.
Posted by Sherlock Peoria at 12:10 PM