And yet, tonight, as our local discussion group discussed "Black Peter," an unlikely couple practically came leaping off the pages at me, and one of those moments of "Why didn't I see that before?" occurred.

"I found out where he was through a sailor man that had met him in London, and down I went to squeeze him."

Awww, such a cute reason for wanting to see someone, isn't it?  Makes you just want to take a trip to squeeze somebody you haven't seen for a while, doesn't it? But it gets better.

Our hero goes down to Sussex to meet this fellow his hasn't seen in years, and they have a nice evening of drinks together. The object of his attentions, we are told, "was ready to give me what would make me free of the sea for life." Think about that phrase for a moment. That's not a dollar amount. That's a lifetime commitment. That's something special.

"Heavens! What a yell he gave," we are told, "and his face gets between me and my sleep!"

Does that not sound like a man in love?

There's something going on behind "The Adventure of Black Peter" that's more than just what we see on the surface. Following the securities and the odd non-reason Sherlock Holmes wants to run off to Norway at the story's end in this account alone give it many a questions. So would it be so unusual to suggest that two men who met in that loneliest of environments, at sea, with that "meet cute" opportunity of the same initials, might not have grown close?

Peter Carey and Patrick Cairns aren't just a rare pair that one might wish could have been together. They are two people who actually were together. How together? Well, there does seem to have been a certain passion there. Eventually crimes of passion, maybe, but passion.

So I'm shipping Peterick now. I mean, just look at them. 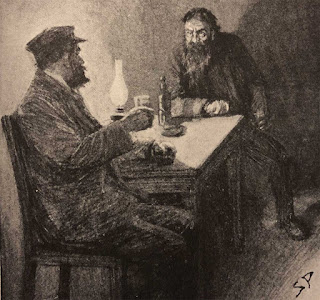 The most romantic Paget illustration in the Canon.

Yeah, I think shipping Peterick is going to be part of my headcanon from now on.