2019 wrapped in a pretty ribbon

Well, I finally managed to get the ribbons off the Baker Street Almanac 2019 without cutting them. 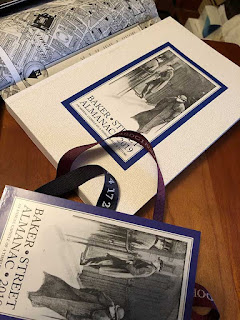 It was smaller in height and breadth than I'd imagined, after hearing the legends of such a thing existing, and taking a look online. And somehow that just made it all the more fantastical a thing.

The Baker Street Almanac series, if you have managed not to hear of it yet (and given that it's only in its second year, that's entirely possible), is a 296-page compilation of Sherlockian data for the previous year, as well as specific lists that extend beyond that. I could list all the wonders that lay inside, but even that hardly does it justice. Editor Ross Davies calls it a time capsule of the year, which it definitely is, but that seems a bit humble as well.

"Herculean labor of love" might come a bit closer. This is no mere amassing of material, an act by itself that would be worthy of praise. It's all of that amazing amount of material carefully curated and pleasantly formatted into a volume worth having. Material running from the mundane to the controversial, from all over the world, gives you a real feeling for just how big the world of Sherlockiana has become . . . and the Almanac is even staying mostly on the familiar main roads. When one looks at all that's in it, and then starts to consider all of that Sherlock stuff out there that isn't in it, the mind starts to boggle. Sherlock Holmes has indeed become like the stars in the night sky.

The Baker Street Almanac is one of those glorious books that one would like to see continue on indefinitely and grow to cover even more material, but unless Ross Davies is a timelord or immortal vampire with lackeys to do his bidding, the limits of being human cannot compete with what our minds envision. We have to enjoy such treats while they last, be it two years or twenty, so I'd definitely recommend diving into this one, either in paper form or its massive PDF edition.

But if you can do the paper, having that physical object to remind you it's there, along with the beautiful wrapping job you'll puzzle at trying not to take a scissors to, it's well worth the thirty bucks.


Posted by Sherlock Peoria at 7:20 AM