Why is today, March 11th, Hug-A-Holmesian Day, you ask? What, you don't like hugs?

But if you must have reasons, for one, the charismatic leader of Doyle's Rotary Coffin, Mr. Paul Thomas Miller, set out to give virus-free hugs all over the Twitter-verse today, as is his tradition (now), and a lot of folks happily joined in. We seem to be on the verge of a world-wide absence of human contact right now, and even virtual hugs are quite a wonderful thing.

(Especially to our friends in Europe, after a certain idiot just gave a certain speech as I wrote this.)

Margie Deck has reminded us that March 11 is the day in 1942 when Vincent Starrett wrote that most sentimental of Holmesian works, "221B." And if that poem doesn't describe a place where Holmes and Watson exist, safe and sound, in a giant cosmic hug, I don't know what does.

According to one chronologist, Gavin Brend, the first hug in the Canon occurs in March of 1886. What is that hug you ask? Well, it's Alexander Holder hugging some beryls to his chest in "Beryl Coronet," but consider this: The one other prominent mention of that very noun, used proper, is Beryl Garcia Baskerville from The Hound of the Baskervilles. And who did Beryl's husband look like? That's right, Hug-o Baskerville!

The Sherlock Holmes stories are full of Hug-o guys, from Baskerville to Oberstein to a long line of graves of that name in "Shoscombe Old Place." Hugs are all over the Canon of Holmes if you just know where to look. If we wanted to name a society of Holmesian huggin today, we could easily call it "the Huguenot Extraction." (Which actually covers those who want out of hugs as well.)

No hugging anyone "in a bear's embrace" and covering them with kisses, as that's bad "Red Circle" form. But it's okay to follow Watson's example when "I dashed from my chair and threw my arms around Holmes," if you want to get some "Devil's Foot" urgency into it.  And even enemies deserve a nice hug, as Professor Moriarty knew. Holmes might have misinterpreted that moment in "The Final Problem" when "he rushed at me and threw his long arms around me," just as Watson would later do. Had Sherlock let the Professor stay on the cliff a moment longer to explain himself, who knows what might have transpired. (IMPORTANT NOTE: Don't do rush hugs next to cliffs!)

So "International Hug a Holmesian Day" comes to us with an excellent pedigree and a worthy intention, so I know I've added it to my annual calendar to prep for next year. You might want to do that as well. (And remember, whatever your gender, consent comes first! Don't be a giant Gorgiano!) 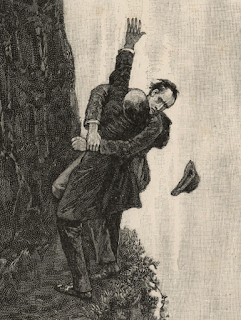 Posted by Sherlock Peoria at 9:11 PM