The monkey's paw of the home workspace

Remember that over-used line "first world problems?" That thing where you're complaining about something that clearly demonstrates how lucky you are? Well, amid all the many troubles of the world right now, one of my issues is the fact that I get to work in a room full of Sherlockiana.

I've always resisted working from home when opportunities presented themselves. I enjoy getting out of the house and around the company of the random folk an office building provides. But when current pandemic demands called for setting up a workstation at home, I gave in and set up a card table next to my normal workspace, so I could just spin my chair and go from my avocation to my vocation. The great hardship of working from home, it seems, is not spinning back.

Yesterday,  I caught Thirsty the deerstalkered duck staring at me, then realized he was staring at me from another side of the room as well. It seemed worthy of a video to toss on Twitter, but waiting until I was properly off the clock was a bit of a push. Taking my eyes off the workstation screen for a moment leads them to one Sherlockian path or another, something that doesn't usually happen here as being focused on one Sherlockian thing doesn't tend to let other Sherlockian things distract you. But a work thing?  Well, this . . . 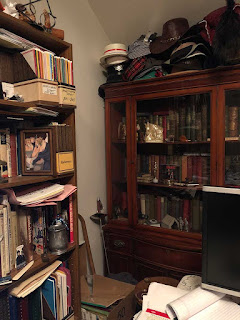 Very quickly leads to some silly idea like this . . . . 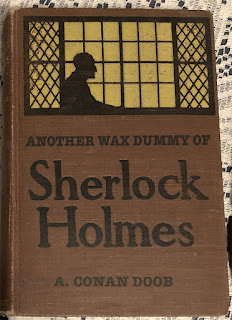 That can't be touched until the end of the workday.

And with all the worries that are hitting all of us right now, the urge to dive into something silly and/or Sherlockian is huge. Just tying that sentence made my guts give the growl of a future ulcer, which just adds another stresser.

So excuse me while I go work out and get some of this stress off before the workday begins, a thing I am damned delighted to still have, even though it's requiring more discipline than ever.

Take care.
Posted by Sherlock Peoria at 7:16 AM