"Of all ghosts the ghosts of our old lovers are the worst."

As the years have passed, the BBC TV series Sherlock seems to have taken on the role of "ex-lover" to some Sherlockians. When the name comes up, the break-up overshadows the original love. And those who never thought it was good enough for you love to jump in and validate their original thoughts. Seeing such trends makes one wonder if someone ever really loved that former lover, and so I had to ask, "Hey, Twitter, how many episodes of that show did you really like?"

And here was the response. 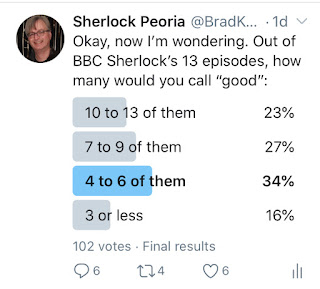 One hundred and two responses isn't huge by any other measure, but when one considers that a lot of Sherlockian publications got by with a hundred or so readers, it fits the hobby. The thing that BBC Sherlock had that most Sherlocks don't was a direct, contemporary rival. Another potential lover who came on the scene and went, "Hey, I can do what he does . . . but American."

So I ran a second survey, on CBS's Elementary. 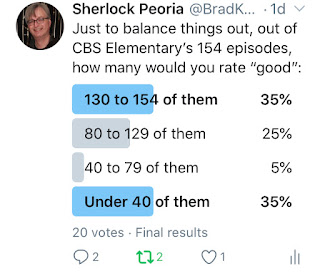 Only twenty Sherlockians responded, and the results were dramatically different, much more polarized. Probably because one can actually tick off the Sherlock episodes in your head, remembering all thirteen (yes, thirteen, you apocrypha lovers) and actually counting the good and the bad. With Elementary's massive episode count, individual ones are hard to remember and either you liked the show or you didn't. What interests me more is that only twenty people felt enough energy about it to even click the survey, as opposed to five times that number for Sherlock.

More Sherlockians seem to hate BBC Sherlock with a passion at this point than seem to love CBS's Elementary -- there's definitely an energy there. Elementary was a steady, reliable show that was what it was. If you didn't like it in the first season, you probably wouldn't have liked it in the last season if you stuck around -- which you probably didn't. Sherlock was a roller coaster ride -- personally I remember how much I loved A Study in Pink, then never felt the urge to re-watch The Blind Banker, but was greatly enthused about The Great Game.

As time passes, will this be our history with the TV Sherlocks of the 2010s? The passionate, great-sex-but-troubled-and-maybe-abusive lover versus the boyfriend who was so steady some thought he was dull? And to play out that metaphor, will there be those who had their sexy-time with Sherlock,  settled in for a long-term with Elementary, then run off to have a blazing affair if Sherlock makes a sweet face and returns for a season five, while the old folks go "Don't do it, he's a bum and still not good enough for you!"?

Movies, however, must have an entirely different metaphor, as I tried to squeeze Downey into this and it just doesn't work. You don't form a relationship with a movie the way you do a TV show, even if you do carry on a love of that film forever. (Had The Great Mouse Detective and Sherlock Holmes in the Twenty-Second. Century been competing cartoon series, I'm now curious how similar polls would result. Or if the coming Enola Holmes and The Irregulars on Netflix were both series, rather than a movie and a series. But for one shining moment, we did have Sherlock and Elementary, both knocking at your Sherlockian door ready to take you out.

"Of all ghosts the ghosts of our old lovers are the worst," old Trevor told young Sherlock Holmes in "The Gloria Scott." How was Sherlock to know that he'd one day be that ghost?

Posted by Sherlock Peoria at 9:06 AM