The first time ever we saw their faces . . .

I don't know if you've ever thought about this, but outside of Watson's agent, his editor, and the production folks at Beeton's Christmas Annual, everyone else in 1887 got a look at Sherlock Holmes and John H. Watson before they ever read a word of the stories. They looked at the very faces of Sherlock and John, and, if they focused on them at all, had to go "Who's that?" 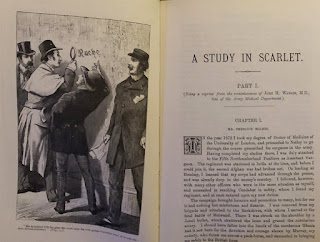 Most of us would surely look over that illustration before reading a word of the text, of course. 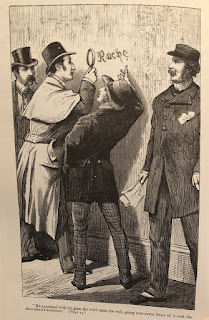 And there, even if we wouldn't have realized it yet, was our first encounter with Mr. Sherlock Holmes and John H. Watson, M.D. 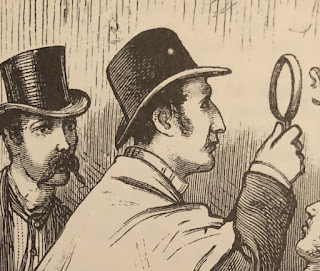 I mean, Watson is "as thin as a lath," but that moustache! It's almost like my theory about Doc Holliday faking his death, coming to London, and changing his name to Watson could be proven with that big old moustache alone. What is going on with his necktie? And his Sherlock Holmes! What kind of hat IS that? The weak chin, the sad eyes, the wispy sideburns . . . not exactly a leading man. That coat does seem to get it, though, so points for that. And he's got his lens out on moment one, at least that stereotype has deep roots.

You just look at those two boys and think of what babies of Sherlockian art they are, fresh out of the printer's womb and about to slap their readers on the bottom rather than vice versa. The artist who created that image, David Henry Friston, had been drawing for magazines for twenty-four years at that point, and surely didn't consider this assignment up to the level of his art for H.M.S. Pinafore of Pilgrim's Progress.  Who was Sherlock Holmes, or even this Dr. Doyle, anyways?

It makes sense that a fellow like Sherlock Holmes would not make a great first impression. Some people you just have to get to know to appreciate the walking wonder you've encountered. And, hopefully, that was Watson's invalid moustache, and he gave it a solid trim once he realized he was going to be going out in public again.

Personality will just get you so far.
Posted by Sherlock Peoria at 7:20 PM