Nothing will make you angrier than waiting for social change. And when it comes, when strides get made, when the public presses declare "SUCCESS! CHANGE HAS COME!" and the parties are over, some problems always seem to remain. Yet since once change has happened, those residual issues can get easily ignored by those who just want a happy, settled existence. Which is all of us, really.

Let me share an article with you from the decade when I was growing into my Sherlockian self.

The article, in The Wall Street Journal for January 6, 1984, was headlined "To a Sherlockian, Some Coolness To Women Is Elementary Canon." It was a write-up of the Sherlock Holmes birthday weekend in New York that year, and really covered it from a distinct point of view: What was the deal with this club that didn't allow female members? 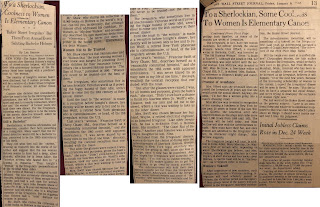 I had the same question.

In the 1980s, the Baker Street Irregulars were the only game in town for American fans of Holmes, because the internet hadn't really made us an international fandom yet. Every American Sherlockian club was a "scion society," a subsidiary to that group, even if no actual ties or responsibility existed. That Canon of our Canon's William S. Baring-Gould's Annotated included a whole chapter on the club right up front. The B.S.I. was Sherlockiana to us back then. And it had a problem with women.

Leadership would change, the former head of the club, whom no one wanted to disrespect, died, and women were finally admitted to the club in 1991. Huzzah! Things were great, right? You could have female parts and get in, right? Now hold on a minute, though . . . not all the female Sherlockians can get in. Just like not all the male Sherlockians can get in. You have to be chosen.

Current members have to suggest you to the head of the group. He has to find nothing "wrong" with you, which includes dressing appropriately for appropriate occasions, not having any dark rumors spread about you whether or not they were true . . . all those things that influence that final gatekeeper's decision-making process. (And both those examples come from snubbed BSI who later got in, once they were somehow in the good graces again.) The Baker Street Irregulars wasn't discriminating based on gender any more after 1991, just discriminating on non-transparent choices of the one guy.

Now, the last "one guy" tried to lay out some "exemplars" for future BSI heads to make that choice. I got a couple folks mad at me for comparing that to trying to create a Sherlockian master race, and, yes, I do get free-handed with my metaphors. But here's the thing: We have to step back and look at the big picture.

The strict BSI invitation-only and limited "prom queens" a year system is all about protecting traditions that have never stayed constant over time. Being able to have a banquet in a single room without going first-come, first serve. Not letting in the "riff-raff." Making sure our own honors from getting in before now still feels important. The only thing is, this protectionist attitude completely limits the opportunities for the Baker Street Irregulars to be entirely what they once were -- a cornerstone part of the hobby. To some, they definitely still are. However . . . .

In 2010, the Sherlockian world changed. There are those who might tell you it didn't, but if you're out in the world, reading this, you probably know better. We had a surge unlike any surge of new potential Sherlockians before. Rather than opening its arms and figuring out how to embrace this wave, a protectionist attitude arose and responded with "We're a literary society!" despite decades of film buffs in their ranks and a Sherlock actor at their very first dinner, and those ranks were closed all the tighter. Instead of embracing the new world of so many new kinds of Sherlockian involvement, the Irregulars started focusing on their history and archives.

That same spirit that kept women out of the group for so many years was still alive in those years of holding newcomers from BBC Sherlock at arm's length. Now, as a decade has passed and the hardiest of those souls have stayed with us and managed to start gaining the notice of the "right" people, it might be easy to deny that attitude of exclusion existed, just as it was easy to say that once women were allowed, discrimination didn't exist. When you're on the inside and comfortable, it's easy to say there's nothing wrong with the world, privilege doesn't exist, and we all have equal opportunity, even in a silly little hobby like Sherlock Holmes fandom (even with its scholarly side, which we tend to wear like a medal on our fandom chests sometimes in front of the other fandoms).

Societal change works pretty much the same for a simple little Sherlock Holmes society as it does for society at large. People don't want to make big moves unless forced to, and even when big moves happen, little problems of the same sort can't be ignored just because the one big move made us feel good for a moment or two. We're in a time when we might see a big move get made, though given certain factors (or one certain factor) we may not. But the trick is to remain aware, even after the big move. To just keep trying to make things better for everybody.

And maybe let the world know you are trying. I often post a blog and hear "Why are you always criticizing the B.S.I.?" The answer is simple -- because no one else will do it in public. I'd hear complaints all the time during the NYC birthday weekend and elsewhere spoken privately. And as the one Baker Street Irregular who became persona non grata the moment I was made a member back in 1989 due to the women thing, I really never had anything to lose by speaking my mind in a public forum. So many Sherlockians worry that saying anything won't get them the invitation to that single dinner, so they don't. But if a private club wants to continue to claim itself flagship to a public hobby, maybe being a little more actively inclusive might help. And I don't mean just "Hey, you're welcome to come to us!" which is where a lot of organizations fail when looking for younger or more diverse membership. I mean, maybe be a little more like the group of street urchins the club was named after.

"Go everywhere, see everything, overhear every one."

I can think of one major Sherlockian event that's been happening for years with no official representation of the those urchins. But maybe they just don't want more people expecting to get invited to that dinner.

A great Sherlockian once told me of the B.S.I. country club style policies, "It's hard to turn a train." And it is. But if you buy tickets for one route over another, the railroad will eventually build to go where the passengers are.  Right now, we're trying to get the world to basically rebuild a railroad so it stops running over black people, and one might say I shouldn't bring up other social issues when we're focusing on that one thing. But it's all kind of connected, you know. When we're judge-y and exclusive for one reason, in one area, we're more likely to spread that attitude into other areas as well.

It's hard, I know, but well worth trying. And when big changes come, if they do, we might celebrate for a moment . . . then get back to listening and still trying to make things just a little bit better.

My apologies to those in my life whose experiences I can't speak directly to without this Sherlockian lens. My biggest minority status probably is just being a Sherlockian in a world of folks that would rather do anything else. But I'm listening, and trying to figure out the rest. Good luck and all my hopes for a better tomorrow are with you.
Posted by Sherlock Peoria at 11:31 PM