Well, I didn't get to polish any glasses or wipe down the bar with my rag during my bartender shift at the Dangling Prussian. The popcorn went untouched and the bar nuts as well. And I'm still finishing this bottle of Zombie Killer. But the fact that I happily "worked" an hour past the end of my shift was probably a sign that the evening was well spent.

With now four hundred sign-ups to "Scintillation of Scions -- At Home" this weekend, I didn't know how things might go at the Diogenes Club Friday night happy hour. Fourteen breakout rooms were set to happen, but not all at once (it looked like six overlapped with my shift), and the math on that looked kind of scary. Even with a 300 person limit, that meant fifty potential people per room! So, instead of hopping on early and seeing what the others were up to, I waited until my time, then went on. (Also, spending a little time on set dressing and lighting -- I wanted to do my Zoom call best!) 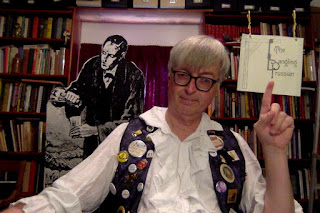 Okay, maybe not my "best" best. The good Carter thought I looked drunk in that picture and I hadn't had a sip yet. But I had my Sherlockian "flair," I had my sign (hanging from an off-camera aluminum ladder) and I had giant Paget Sherlock, neatly trimmed out for the first time, pouring drinks in the back. The puffy shirt is just because I like a puffy shirt. Why we don't wear puffy shirts all the time is beyond me.

Soooo, 7:30 comes, and the able captain of the event, Monica Schmidt, moved me into the breakout room that I was "celebrity bartending." (Sherlockiana is a funny hobby in that we're almost all celebrities within our ranks, it seems like. If I remember your name and you're a Sherlockian, that's good enough for me. I mean, Sherlockians, right? You just don't see 'em every day!) The chaotic mob scene I feared turned into me in a breakout room by myself, since it was a brand new room.

I turned away for a minute to get a bottle, and turning back, my first visitor popped in (@221BCrow), followed by a second, and just as we started to chat, the screen filled -- The Red Circle Lounge had let out and Peter Blau had apparently put in a good word. Of course, two of the new faces had been earlier hosts of their own breakout room, Julie McKuras and Howard Ostrom, and eager for more. They might have even both gone for the whole six happy hours, I think, which would have been quite a thing.

We had between thirteen and sixteen for most of the time, and it was good to see folks like Nea Dodson, Charles Prepolec, and Vincent Wright again, and hear Tina Rhea and Michael McClure again (as some were a bit more shy and just did audio), as well as meet some new folks (I should have written down names, as sixteen ounces of Zombie Killer [221 calories per serving!] has not helped my memory. I keep wanting to say "Dawn" was there, and I know there was no "Dawn" there. I have no alcohol tolerance left.) We did get to see Elinor Gray cook, though!

While it was good to hear from the familiar faces, at it's most busy there were some new folks that I was disappointed we didn't get to hear as much from, as the conversation had a certain Darwinian aspect to it, and it was easy to get talked over if you started to say something. The one flaw in a virtual cocktail party, you can move from room to room, but you can't move from this two or three people to that two or three people as you would at a regular cocktail party. Organized Zoom meetings tend to be a bit more . . . organized.

It got easier to hear from folks as our numbers dwindled as the Dangling Prussian went past its scheduled time and we ran for an extra hour, though one still might get a quiet drop-in. The funny thing was, just like Friday night at a typical conference, at some point people spoke of needing to get their sleep for the next day's events, and I am here trying to stay awake long enough to finish a blog post on it.

Could be. In any case, it was a very pleasant way to spend an evening, and I think that even after the plague days are done certain of these Zoom gatherings will survive, as I'm seeing so many people connecting who otherwise couldn't do the travel needed for so many events. We even did discuss the possibility of future live events offering a program feed as a second tier of registration in addition to their live attendings.

We've only started this era of remote Sherlocking, now that we were forced into it. And it's pretty good. On to tomorrow's events!

Posted by Sherlock Peoria at 11:56 PM