A dig at the elder Holmes brother?

In April of 1903, Sherlock Holmes had yet to return to the pages of The Strand Magazine.

Watson's agent was publishing Brigadier Gerard stories there, sure. But it would be five more months before Sherlock Holmes returned in "The Adventure of the Empty House" in the September issue. And yet, looking for something else this evening, I couldn't help but think Mycroft Holmes had made it into the Strand a few months before his more famous brother.

True, Mycroft Holmes had no Watson. He liked his Diogenes Club and spent his time there in silence. No discussions, no adventures, no reason for anyone to write about him at all. Except for maybe one thing.

"Heavily built and massive," Watson writes of Mycroft, "there was a suggestion of uncouth physical inertia in the figure, but above this unwieldy frame there was perched a head so . . . [compliment, compliment, compliment] . . . that after the first glance one forgot the gross body and remembered only the dominant mind."

Well, Watson certainly remembered that "massive" and "gross" body to mention it in his work. Another writer, who it seems might have met Watson at the Diogenes, was not nearly so kind.

"Great uneasy jelly of substance! The fattest clubman in London."

Things were different in 1903, and not always kind to those of us with a bit more of a belly than we should have -- even though many a local strong man was not the washboard abs type back then. Still, reading H.G. Wells's April 1903 contribution to Strand Magazine, you have to go . . . Welllllsss?

"The Truth About Pyecraft" is the name of his tale, and the name being a perfect parody for an overweight clubman named Mycroft seems just a bit too close for comfort. 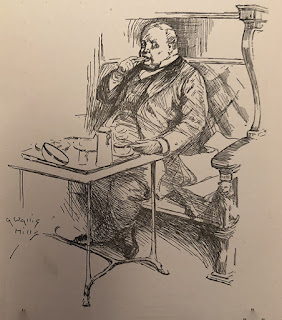 Wells narrates a tale of his encounter with "Pyecraft" and how, in the smoking room of their club (where perhaps Diogenes members were allowed to converse), the conversation turned to Pyecraft's weight issue and how he wished to lose weight via some form of pill or drug. The narrator, it seems, has a secret family recipe for "Loss of Weight," and Pycraft would greatly like to try it. And he does, making several attempts before getting it right.
This being H.G. Wells, of course, something fantastic must be in the air, and let's just say "losing weight" and "losing size" are not strictly the same thing if you think about it.
Was H.G. Well's "Pyecraft" a parody on Mycroft Holmes, inspired by the rumored return of Sherlock from the dead, after encountering the elder Holmes at his club? Was Wells angry with the British government at that time for some reason? He was living in southeast England at the time, so he probably wasn't running into Mycroft at his London club.
Probably just a case of another Sherlockian spotting a similar name in a place associated with Sherlock Holmes. But one does have to wonder if Wells had heard Watson go on about his friend's larger brother just one too many times at author gatherings. One never knows about that Watson.

Posted by Sherlock Peoria at 10:55 PM