The lost love of Sherlock Holmes?

Digging through old things looking for other old things, one inevitably finds a dig-stopper, that thing that, even though you remember it, you just have to look at again. Tonight, it was, according to SHOW magazine, someone Sherlock Holmes fell "deeply in love" with, and it wasn't Irene Adler or John Watson. This was more of a Young Sherlock Holmes situation, but with a college-age young Sherlock and the poor girl didn't have to die to make him want to become a detective.

And so, we turn to Billy Wilder's The Private Life of Sherlock Holmes.

The thing is, unlike Elizabeth Hardy of Young Sherlock Holmes, we don't know exactly what this lady made Holmes become. We are told that even though actress Jenny Hanley's Private Life character "is on screen only for a very few moments, Jenny's presence lingers throughout the rest of the picture." 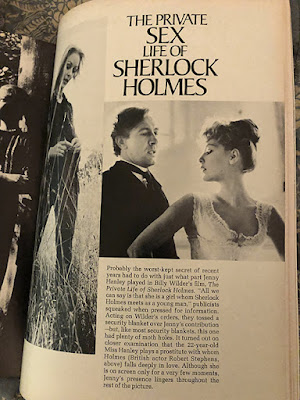 The only thing is, whoever that lady was whom Sherlock Holmes had such an unknown affection for, like so many other parts of The Private Life of Sherlock Holmes, she wound up on the cutting room floor. IMDB doesn't even give her a Sherlockian nod, while her part as "the Irish girl" in On Her Majesty's Secret Service and "Sarah" in Scars of Dracula, along with a lot of other credits, still got her there. 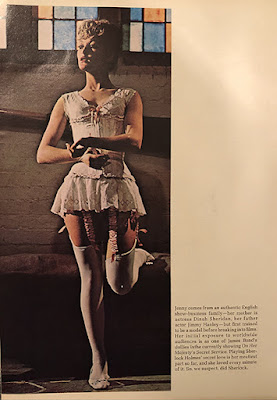 There is an underlying theme of Sherlock Holmes's reticence to have a relationship in The Private Life of Sherlock Holmes that somehow starts with Jenny Hanley's character, a sex worker that some sources say he won the favors of after a college boat race. It somehow connects with his later relationship with Gabrielle Valladon, and I seem to remember a long-ago telling that it was that he always fell in love with women on the wrong side of the law. I'm sure current views of the film take a different opinion on that.
But, hey, in 1970 you could sell a magazine by touting "The Private Sex Life of Sherlock Holmes" on your cover. 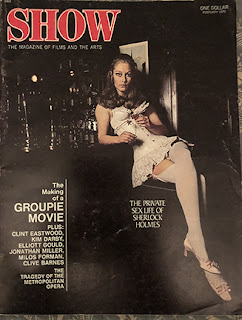 Posted by Sherlock Peoria at 6:14 PM