The rise of Sherlock Holmes, elementary, and the Garrideb.

Today I stumbled across the Google Ngram Viewer, a lovely device for charting the use of phrases in "lots of books" over time. And what great fun it is to play with!

It seems to come all ready to chart "Albert Einstein,Sherlock Holmes,Frankenstein," and if you limit it to "Sherlock Holmes," the following chart pops up: 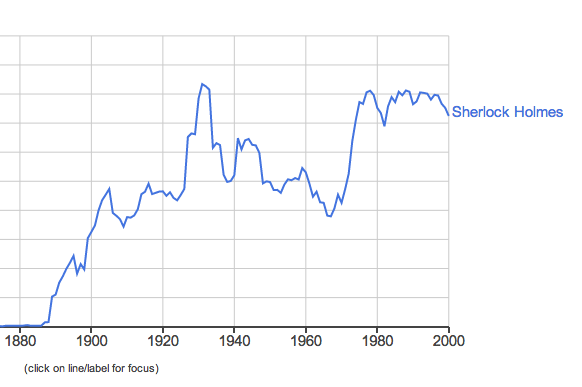 Sherlock Holmes obviously couldn't become popular until he actually existed as a working adult in the 1880s. There were plainly many Sherlocks before him, however, as this chart of his first name reveals:

So let's try something different -- the one word most associated with Mr. Sherlock Holmes, even before that dreadful TV show: "elementary."

This is where it gets interesting. "Elementary" actually peaks in the year 1929 and again in 1938, with a nice vogue in between. And since Basil Rathbone doesn't even start his reign as Holmes until 1939, we can't give him credit -- he might have even caused the word to become less popular, as crazy as that sounds. No, 1929 is definitely Clive Brook's Sherlock era. But since the Canon had its final story in 1926 and complete editions were just starting to come out then . . . or maybe it's complete coincidence and has nothing to do with Holmes, being instead, all about elementary schools. What can we be certain had to do with Sherlock Holmes? 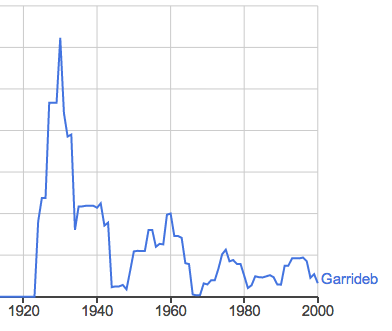 If you look at the graphs for "Sherlock Holmes," "elementary," and "Garrideb," you'll find the greatest surge of popularity among published works in the Google Ngram search occurs right around 1930, when The Complete Sherlock Holmes was published. No stage actor, no movie series, no fan club ever had the impact upon Sherlock Holmes in print as that moment in time. Of course, I am reading the data with a certain bias. Take your own wanderings through the Google Ngram Viewer and see what you stumble upon -- fun will most certainly be a part of it, if you're anything close to the data-geek this blogger is.
Posted by Sherlock Peoria at 5:33 PM