The magic spell of an old book.

Just when you think you have the old addictions licked, that you have them under control, you find your car parked in front of the local bookshop upon returning to the car from a hurried trip to get your hair cut. And in any store full of old books, you know there has to be at least one Sherlock Holmes related treasure to be had . . . .

It's been years since I've found myself succumbing to must-add-to-the-collection syndrome. Years. But as with any addiction, it's a patient demon, lying in wait like a seventeen-year cicada, just biding its time. 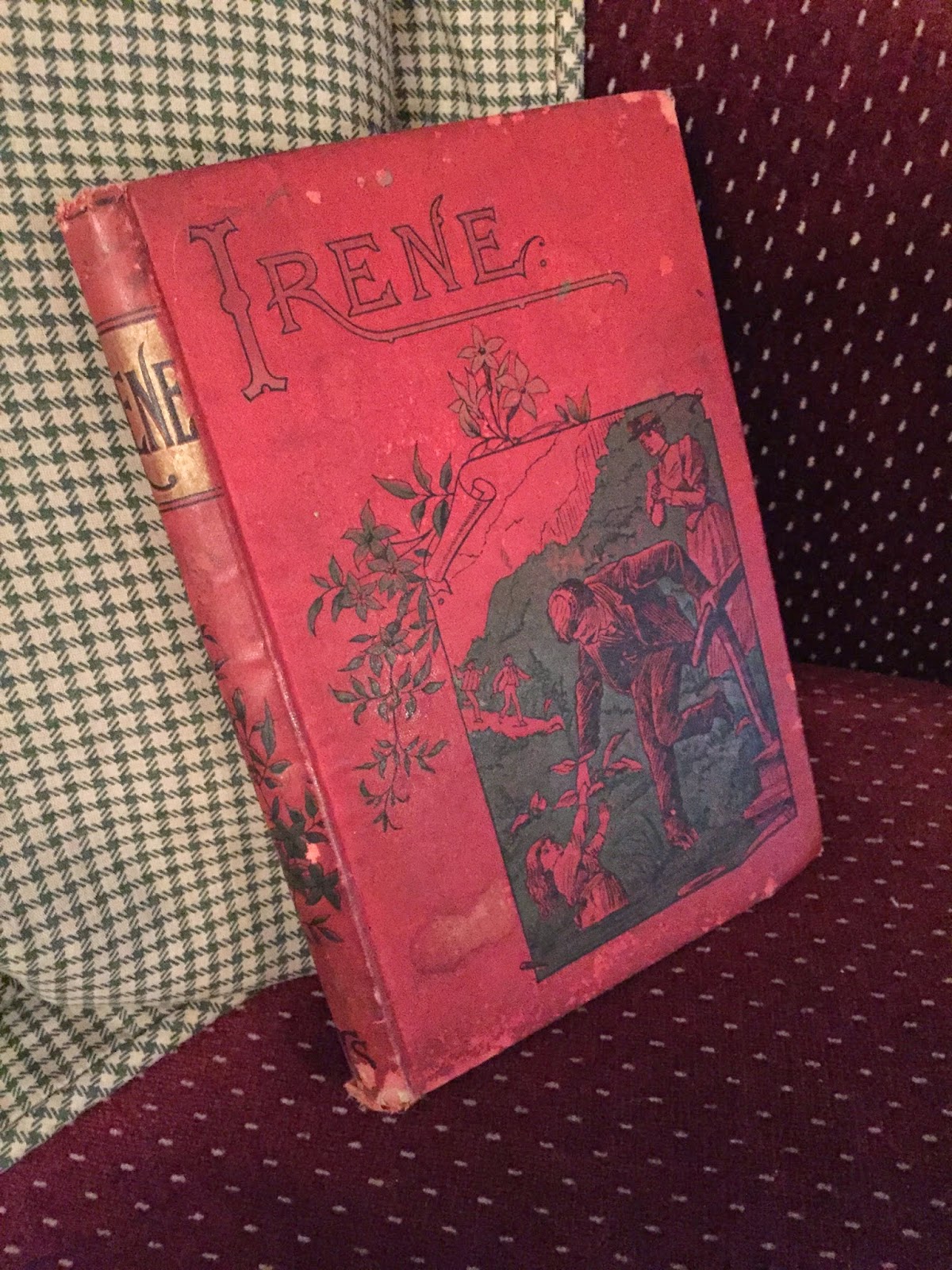 I mean, it's a pretty enough book. And it's title is Irene. And that was all I needed to fork over the ten dollars the bookseller was asking. I shook my head at my own silliness, I mean, Irene, right? Like it's going to be about that Irene.

But I got home, and the book began to weave its spell.

It was, from the beautiful handwritten inscription, once the book of "Theo Harris From Ca. Ave Cong SS, Jan. 17, 1908." Using my Watson-like deductive skills, I immediately inferred that "SS" meant "Sunday School" and "Cong" was "Congregation," as the book was published by the Religious Tract Society of London. Ah, London. A book from Sherlock's home town!

Another page added simply "MORRISON AND GIBB, PRINTERS, EDINBURGH." Another significant town in the history of the great detective. Joe Bell's town.

Another page reveals the book was written by "Mrs. Coote, author of 'Grace Trevelyan' . . ."  One starts to wonder if Mrs. Coote wasn't a Sherlock Holmes fan, combining the names of Grace Dunbar and Percy Trevelyan like that -- if Grace Dunbar wasn't from a story two decades later. Still, Trevelyan? Hmm.

The story's action starts with three characters: Irene, who is "five-and-twenty, her elderly aunt, and a gentleman of about forty named . . . get this . . . "Mr. Montague."

At this point, I'm going, "This can't have escaped the notice of every Sherlockian in the past hundred years." In fact, I'm almost certain I've read of Mrs. Coote's work somewhere in the last thirty years. Perusing my library and many an index was of no help. The trusty Google brought up a copy of a British publication called The Bookseller from July 5, 1893, which contained the following synopsis:

"Irene. By Mrs. Coote -- Irene Melville and Leonard Montague are two earnest and high-principled young people to whom Irene's brother, Donald, when he hears of their engagement, says, "There's no one in the world good enough for either of you except each other." The same Donald has at one time been something more than a scapegrace. At last he sinks so low as to forge Montague's name, but the latter destroys the cheque, and Donald is led by the man he has attempted to injure to see his sin, and after a serious illness repents and reforms. The short story is well told and point an unimpeachable moral."

While, indeed, there is no one in the world good enough for Sherlock Holmes or Irene Adler than each other (Eat it, Mary Russell!), and even though Irene Adler appeared in the public prints a full year before that synopsis of Mrs. Coote's book, Sherlock Holmes could not have been pseudonymed with a reference to his Montague Street days before May of 1893. So, alas, this magical book by Mrs. Coote cannot refer to our Irene and her "Mr. Montague."

Unless, of course, Mrs. Coote had some personal acquaintance with a man on who lived on Montague Street and a woman he would later become involved with in 1888. Hmmm.

Sometimes a Sherlockian's book-buying is a habit that seems like an addiction, and sometimes it's . . . as the old Queen song says . . . "a kind of magic."

And with Sherlock Holmes, you never know when a golden glance is going to come along.