Maybe I'm just too competitive. Growing up with multiple siblings can do that to you. The latest flare-up of that trait came this evening, thanks to my finally getting around to checking out the "Which Sherlock Holmes are you?" quiz at SherlockHolmesFan.com.

Those silly "Which [Insert favorite thing here] character are you?" have been one of the more fun things to pop up on Facebook since it's start. A bit like a backwards horoscope, a weird little dice roll for an ego stroke, and a celebration of fan fun, all rolled into one, there's nothing vital, serious, or important about them, and for better or worse, they're just fun.

I've seen which politico on House of Cards I am, which Marvel's Avenger, which convict on Orange is the New Black, whatever looks like it might be intriguingly non-obvious at the time. (I mean, I have always known which Star Trek character I am. Some things just are.)

But which Sherlock Holmes?

Out of Cumberbatch, Downey, Miller, Rathbone, and Brett?

(Nice of them to give a "You're not Sherlock!" option in there, wasn't it, Howard?)

I had no idea. And the questions didn't seem as obvious as some similar quizzes, where one could pretty much skew the results. 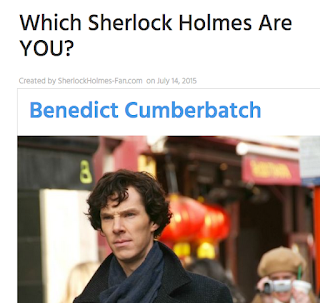 Like I said, I'm competitive, even in non-competitive endeavors. But it also seemed to reveal that good ol' Benedict is apparently now my favorite Sherlock Holmes. The Rathbone/Cumberbatch tie seems to have tilted toward the modern contender, with his unforeseeable future output. (Could coming seasons contain something so off-putting that his Sherlock falls from grace? We shall see.)

All that said, I may have a new favorite Sherlock Holmes come September. My television has started to give me promos from an AU network for a Sherlock show that may be coming in via some Twilight-Zone-ish source. And if that sentence makes no sense to you and doesn't sound like anything you've heard of, don't worry. It probably shouldn't and neither should you have.

I'm just another blogging looney of the interweb after all, and this fall, you might just get to see something old and something new, something borrowed and some part of it BLUE. Or maybe not actually see it.

For now, however, WOO-HOO, CUMBERBATCH!