And now, a most minor moment in Sherlockian history.

The year is 1987. At least it might be . . . given the future-dating that comic books used to keep magazines on the racks longer, it may have even been December of 1986. The Sherlockian event? 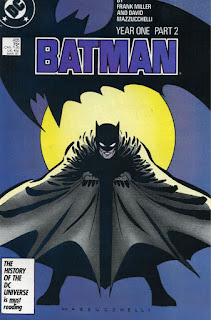 Issue #405 of Batman. It was the second chapter of Frank Miller's "Year One" storyline, the storyline that made "Year One" stories a comic book standard. And if you turn the still-printed-on-newsprint pages back to the letters page, you'll find a DC comics editor responding to a fan's letter with the words, "Quick, Watson, hand me the wrench!"

Said fan was not writing in about anything to do with Sherlock Holmes, oddly enough. He had typed up his letter, put a stamp on it, and dropped it at the post office on his way to work just to complain about the over-used plot device of injuring Batman's ribs. The curious coincidence about the editor's reply, however, was that he was replying to a Sherlockian who had just published a book on Holmes's methods and was heading to New York for the annual Sherlock Holmes birthday festivities very close to the time that issue came out. This Sherlockian right here. The one writing this blog.

I had forgotten about it entirely until Dennis Ellison pointed it out in a Facebook comment this weekend. Letters pages aren't reprinted in trade paperback collections, so he had to be reading a copy of the original issue to notice it, which makes the chain of coincidence for that reminder become even more complex. With that, I give you Batman letters page mention of Dr. Watson from 1987. 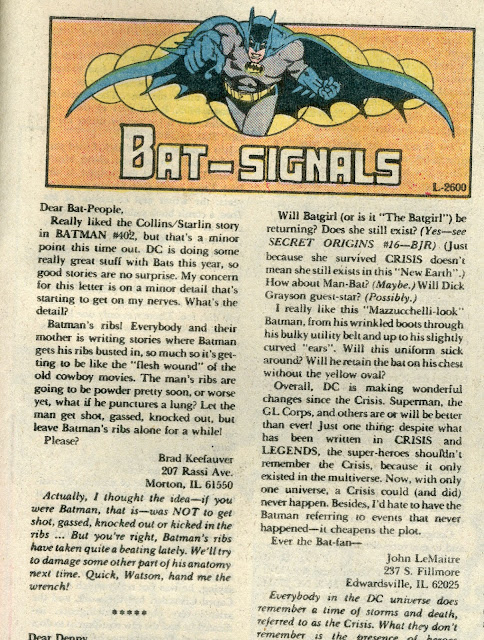 Posted by Sherlock Peoria at 7:34 AM