This year, American's oldest Sherlock Holmes club celebrated twenty-five years of allowing women into its membership. If you're twenty-four years old, the Baker Street Irregulars admitting women might seem as historical as women getting the vote -- a part of all that pre-you righting of wrongs to get us to where we are today. 1991 is now a year that lives in American Sherlockian history.

In my personal Sherlockian history, however, 1989 will forever be the year that overshadows 1991. For all those cheers you might hear on recordings of Tom Stix admitting the first women to the group in 1991, those voices were not nearly as loud two years before. In fact, they were pretty much silent. And that is where my troubles started.

In 1989, I was returning for my second Baker Street Irregulars dinner, having first been invited to the event in 1987. As an American Sherlockian who cut his teeth reading the Baring-Gould Annotated, the possibility of getting made a member was a much-to-be-desired outcome in the big Sherlockian picture. But as a guy who had attended his first BSI dinner at age twenty-nine and found the whole single-gender thing a little repulsive in the modern world of 1987, I was having a very real conflict. My personal stand on equality of the sexes and the Sherlockian dream of getting a BSI shilling were definitely at odds.

Turning down membership might have been a viable option for a more mature Sherlockian with more experience in the Sherlockian community of that time, but as a young guy from remote Morton, Illinois, it didn't seem like the kind of thing where a second chance was in the cards, So I did something it didn't take long for me to be ashamed of. I went to NYC, smiled appropriately, and accepted membership in the BSI in 1989.

It might have ended there, but like I said, the men-only thing really bothered me. There were no blogs back then to vent such frustrations, but Sherlockian society newsletters existed, and I had a monthly column in our local one. And what did I write for the very next issue? Well, this sentence, among others:

"I find I am a member of a group that discriminates against women. It just doesn't sit well on my soul, regardless of any honor involved."

Think I might have phrased that better? A lot of people did. Instead of calling out the truly antiquated "no women allowed" policy and bringing that issue to the forefront, the resulting controversy was more about how a proper Irregular should have behaved. Even some of my friends were taking the stance of "He didn't mean to do it! Really, he's a good guy!" But if you look at most social justice situations, the first criticism of those who protest is always how they should just behave themselves and go along with the system, so I don't feel too badly about that phrasing. There was no way I could have appropriately expressed my true feelings about the situation and pleased everyone.

Men-only was the accepted status quo at that time, and screw you if you didn't like it, ya traitor.

Since we know that Tom Stix would allow women into the club a short two years later, it became pretty clear in hindsight why the wait until 1991. Julian Wolfe, the former head of the Irregulars who famously crumpled the protest statement of the young ladies who picketed for admittance in the sixties (and later formed the Adventuresses of Sherlock Holmes), was still alive and coming to the annual dinner until that time. But I didn't know all of that in 1989.

The fact that one man could stop progress that way shaped my entire view of the "benevolent dictator" aspect of Irregular management, no matter who that one man was. The fact that women not being invited or admitted not only wasn't an issue with the BSI, and that it apparently could get you told to "get the hell out" by ranking members who felt the organization itself was sacred above all other ideals . . . well, after that, this Sherlockian wasn't coming back to be present for that big surprise in 1991 when things did change. It was eight years after that before I cautiously wandered back for a visit. But things are better now, right? It's all good, right?

Well, if you weren't where I was in 1989. A person's emotion-linked memories are always going to be the strongest, and trust me, the things that piss you off about fandom now will most likely still get under your skin twenty-five years from now. You can be delighted at the changes along the way, but the parts that stay the same, as well as the original crap you had to deal with . . . well, you just have to take what satisfaction you can from the fact that its over, consider that the generations after yours have their own issues that are going to be just as troublesome to them, and wish them luck.

I'm going to close this little essay with a very rare photo -- a picture of two guys standing together who each didn't really know anything about the other at the time it was taken. One of us really wanted to see women included in the Baker Street Irregulars. The other seemed to think otherwise. And boy, was that a long time ago . . . thank goodness. 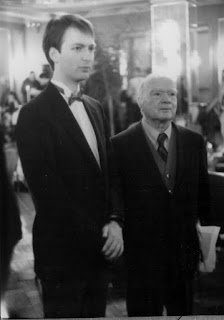 Posted by Sherlock Peoria at 5:53 AM