A preview of coming distractions.

October is coming, a busy month no matter how you stack it, and I'm already planning for some additional help with the blog. Since I know many of my readers prefer when I stay with the original Canon of Sherlock Holmes in my meanderings, I thought, "Why not get someone from the original cases of Sherlock Holmes to do the job? In fact, why not get the MOST Canonical character from Holmes's cases to take a few blogs?"

No . . . not . . . yes, I know, Dr. Watson appears in more stories than anyone. And he's a great writer. Not disputing that at all. But, y'see, John H. Watson never claimed to be the most Canonical figure in the whole Holmes legend. And he certainly would have known if he was, right? He had plenty of time to write "I am the most Canonical character in the Sherlock Holmes Canon." But he didn't, so no. It's someone else. Just ask him . . .

EDITOR'S NOTE: The rest of this blog is written by Sherlock Peoria's sometime October guest-writer. The thoughts, opinions, and facts cited by the writer below were not approved or even considered sane by the usual staff and management of this blog.

I am the most Canonical man in the Canon, am I not?

What? You do not recognize me at once?

Though you may have seen the dog whip in my hand shiver slightly in that moment, you were in no danger. My passion at the thought of the rebellious artist Sidney Paget always causes such a passionate reaction in me. It is his fault this handsome face is not as well known as it should be. He did not capture my good side at all.

And, it is true, you may know me as "Henderson of High Gable," the eligible family man with two charming daughters who travels extensibly. You undoubtedly stay at the finest establishments, as I do, do you not? Our paths may have crossed in Paris, Rome, or Madrid. Such grand hotels! Was it the Hotel Escurial where we met?

That bad business there. To learn that the Marquess de Montalva and Senor Rulli, his servant, were both murdered just down the hall. We checked out immediately after that, and perhaps you did as well. I heard my description was circulated, as our abrupt departure seems to have made us suspects, and that some even mistook those descriptions for those of the victims.

1892 was such a very strange year. I could tell you such tales!

And perhaps I will. Let us dispense with all this charade of poor recognition skills on your part, who could not recognize me, the most Canonical man in the Canon?

Yes, it is I, Don Murillo, the Tiger of San Pedro. You know me.

And I shall be back in October. Why? One might as well ask "Why are you the most Canonical man in the Canon, Don Murillo?" Everyone knows the answer, even the littlest of children. 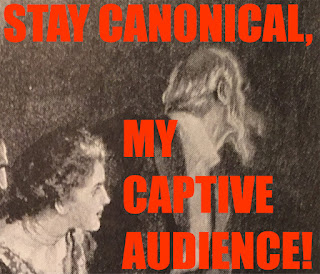