Preparing to mug the guest.

It's been quite a while since we had any visitors wander through Sherlock Peoria.

In the pre-internet days, when letters and social calls were a primary means of Sherlockian communication, both visits here and there seemed a lot more common. Perhaps it isn't the world, but my personality that changed with age, however, so I'm not going to commit to that thought. In any case, today we're having company in our Sherlockian river city.

Rob Nunn, my John H. Watson Society Treasure Hunt team-mate for the second year in a row, is coming up for the day to confer upon the devilish quiz and dwell upon other matters Sherlockian, and as with any preparation for company, a little cleaning is involved. The good Carter, who has a little more house-pride than myself, has definitely been working harder in that area, while my attention has drifted to the more Sherlockian areas.

Like "Why do I have so many coffee mugs when I don't drink coffee?"

My library shelves are overflowing with the damned things. Holding pens. Holding bookmarks. Holding anything but coffee. So I e-mailed Rob, "Do you drink coffee?"

The first half of my Sherlockian career seems to have been about collecting Sherlock Holmes related items. Now in the second half, it's more about finding good homes for all of those things that never came into use. Hence the assortment of coffee mugs below that I am today going to try to push off on my partially unsuspecting guest.

Some are just Sherlock pictures, some are duplicates, one is for a jazz Sherlock Holmes society with that I never had anything to do with so I'm not even sure why I have it. One late entry that didn't make the picture is from a "First Annual" event that never had a second incarnation . . . making the "Annual" a little awkward at this point.

Coffee. I just don't get it. Not a fan of beer, either, but a pint glass makes an excellent repository for some freshly brewed iced tea.

And just in case you think I'm totally against Sherlockian mugs, let me show you the ones that I'm clinging to for my made-from-scratch hot chocolate that is a part of my breakfast routine at least three times a week. 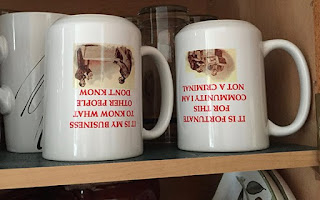 Now these, to me, are proper cocoa mugs, a couple inches deeper than the traditional coffee mug and with a handle I can get all four fingers into. Plus, Paget drawings and some excellently chosen Sherlockian quotes that are an excellent way to start the day ahead. Maybe that's why I like them so much, as they set a future tone rather than reflect upon times past.

Posted by Sherlock Peoria at 10:34 AM