Just for kicks, I decided to check out the price tags on SHERLOCKED USA tonight.

And boy, nothing will make you feel like you grew up in the Great Depression quicker than that. Want to live like a Baker Street Irregular at the official U.S. Sherlock con in L.A. and get to "go everywhere, see everything, overhear everyone?"

That will be $2, 995, please. Airfare, hotels, meals, tax, tips, dealer's room purchases, and that mysterious $1 fee they tack on, not included.

Old news to anyone who dealt with the con in London, I know, but let me tell you about the olden times, before celebrity autographs were a revenue stream and cons where corporate enterprises. No, I'd better not. Because it just hurts too much to think about how much it's all changed. (But for the record . . . autographs of the entire main cast of classic Trek in Wrath of Khan days, plus a morning jog with George Takei, just for the cost of a standard ticket.) It's a different day -- a too-favorite topic of those of us who remember things being another way once.

It's hard to find a fan niche that isn't being exploited by somebody looking to make a few bucks off of that enthusiasm. Funko "Pop!" vinyl homunculi. Convention corporations. A version of Monopoly or Clue tailored to any TV series that gets above a certain ratings number.

And I can even remember the time this all started . . . they seemed to go after the Trekkies first. Collector plates, making them buy their DVDs episode-by-episode when complete series sets were coming out for other shows, and the first pay-for-an-autograph cons. But eventually the eye of the great hive-minded beastie called commerce saw Sherlockians.

Americans have a lot more time to kill and a lot more folks willing to take our money to give us little moments of fan or collector happiness than ever before, and the days of Jeremy Brett touring the larger PBS cities are past, but we still have this . . . 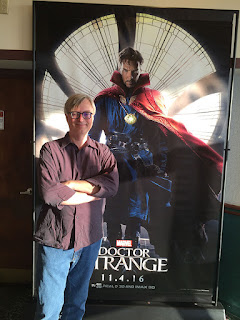 Of course, I was on my way in to pay an extra six bucks over normal movie ticket prices to see a Rifftrax Live screening of Mothra because the good Carter wanted some MST3K fan fun. So even standing next to cardboard Cumberbatch is not without a price . . . ah, well. Remember when they used to say "the best things in life are free?"

They still are. You just have to figure out how to get past all the people willing to charge you for them.
Posted by Sherlock Peoria at 7:06 AM