The Sherlockian States of America.

In trying to come up with a team name for our Sherlockian trivia team, I accidentally stumbled on to something that hadn't really sunk into my Grimpen Mire mind until just now: The twenty-four Sherlockian states of America.

Our trivia team is lucky, and all four of us currently hail from states specifically mentioned in the Sherlockian Canon -- California, Colorado, and Illinois. Or maybe it's not luck -- if you go by the 2015 population figures, there are 232,517,691 people living in the Canonical states. And those poor souls living in the non-Canonical states?

88,901,129. That means about three times the people live in states mentioned in the Canon than those who don't. Meet four random Americans, and three of them are in the "Hey, my state's Canonical club!"

Of course, this probably means we're the ones contributing criminals to England for Holmes to have to deal with. (Yeah, Florida, I'm looking at you!) But a lot of water has passed under the imaginary bridge to Britain since the Victorian era, and like Australia, we've outgrown our criminal past.

So there's twenty-four American states in the Canon. And five of the original thirteen colonies. So you know what that mean? The flag of the Sherlockian States of America looks something like this: 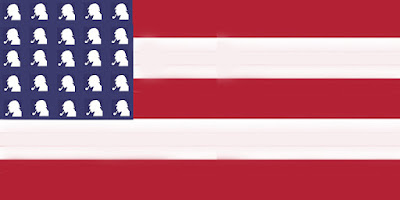 Five stripes for our five original Canonical colonies, with twenty-five little Sherlock silhouettes honoring our twenty-five Sherlockian States of America. "Wait a minute!" you might be exclaiming, if you're an observant sort, "Earlier you said there were twenty-four states named in the Canon!"

Well, yes. But the "Carolinas" get a group reference, and even though South Carolina isn't as exactly referenced as North Carolina, the balance of twenty-five "Sherlock stars" over twenty-four justified their inclusion. (Well, that and the Hansom Wheels scion society of South Carolina. I have a slight bias over Sherlock Holmes clubs with "Hansom" in their name.)

Will Sherlock Holmes ever become so popular that the Sherlockian States of America get all uppity and we decided to secede from the other twenty-five? Well, we do have Texas in our bunch, and you know how they like to bring that up. And Utah might have been known to once or twice try to get recognized as a separate nation. These days, you never know.

What are the rest of the twenty-five Canonically-mentioned states I haven't mentioned here? I'll let you look that up -- we might want the element of surprise when the Sherlockian Civil War comes. My in-laws, my relocating niece, and my best non-Sherlockian pals are safely in our borders, so I'm not too worried on that account.

As for the rest of you, well, hopefully our president will be Sherlockian-refugee-friendly so you can come on over the border. (Yep, talking about you, Indiana and Minnesota. Bring your stuff.)

Posted by Sherlock Peoria at 12:21 AM