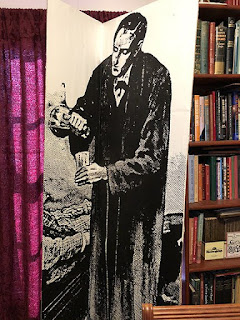 The second overlarge image of Sherlock Holmes has "HOLMES" printed right across the center so I don't forget. It's a full-sized movie poster that I picked up in celebration of the first major motion picture featuring Sherlock Holmes in a very long time. And it's Sherlock is now generally thought of in America as one of the "big three" Sherlocks of our current generation. 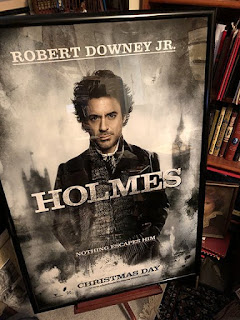 But it's interesting to me that after all this time, and its constant presence for eight whole years, it's still a poster of Robert Downey Jr. to me. And I don't think it will ever really be Sherlock Holmes for me, like a photo of Benedict Cumberbatch or even . . . in a prophesied Anti-Sherlock sort of way . . . Jonny Lee Miller will continue to be. It's almost like somebody sent Robert Downey Jr. back to 1881 in a time machine, replaced Sherlock Holmes with RDJ, and brought Sherlock to the modern day, where he began living under the name "Benedict Cumberbatch."

Jude Law, curiously, is Dr. Watson to me. Law is an actor who, despite seeing him in dozens of movies, never solidified as a "Jude Law" character the way Downey has in my brain. Or maybe Law just actually looks more like Dr. Watson than RDJ does like Holmes. Robert Downey Jr. definitely has a more Lestrade-like build than Holmes's tall, bird-of-prey look.

While he'll always be known for playing Sherlock Holmes, I don't know that Robert Downey Jr. will be remembered as *a* Sherlock Holmes, like Rathbone or Cumberbatch, those fellows who personify Holmes in the consciousness of so many.

But maybe I'm completely wrong in that, and Downey has already imprinted his Sherlock on legions of younger Sherlockians, to be eventually celebrated as one of the greats. I'll be curious to find out -- let me know if you have any insights in that direction.
Posted by Sherlock Peoria at 1:41 PM