Starting the year with a pair of forty year old calendars.

Preparing for Sherlock Holmes's Peoria Birthday Party on Saturday, I came across the perfect thing to discover on a New Year's day: Calendars! Forty-year-old calendars!

One lays out the events of Holmes and Watson's lives, with some interesting non-Canonical bits. "Watson in America" happens in 1884 and 1885, then Watson marries someone named Constance Adams in 1886. Not sure where those ideas came from at this point, though that name sounds familiar, and I'll have to do a little comparison to see which chronology Bob was using (guessing Baring-Gould Annotated, knowing the point my friend was in his Sherlockian career). 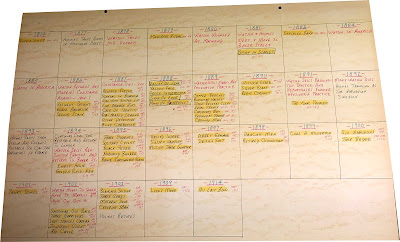 The second poster board calendar drills down on Holmes's career and is a nice overview of when he met characters from the various stories (or when they first appeared, as in Mycroft's case). 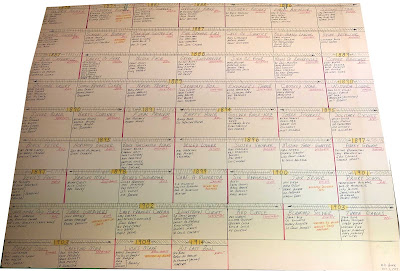 In this day and age there is something quite charming about such pieces of hand-written Sherlockiana, and the fact that I didn't even know I had them added a nice surprise. (How did I not know? Trying cleaning out an entire Sherlockian house some day and see how quickly otherwise interesting pieces get "Where can I stack this?' moments.)

It was a great way to start 2018, and it'll be great fun to put them on display at the birthday party for Sherlock at Peoria's North Branch Library on Saturday. A lot to be discussed there, as we all know is true of the Canon itself. And given Vince Wright's thought of creating a society for Sherlock Holmes chronologists, finding these is a great omen for that Sherlockian specialty in the year ahead.