A questing Sherlockian comes to town

For those of us lucky enough to had some kind of Holmes club in our town, pre-internet, some of the oldest Sherlockian friends we have are the ones we met at our first local Sherlockian society meetings. Outside of the good Carter, I can count two of those whom I see every now and then, George Scheetz and Suellen Kirkwood.

Suellen is probably not someone any Sherlockian outside of Peoria would be familiar with, as she's always been a local favorite. Her hand-crafted banquet favors from our early dinners and she remains a part of our Peoria Sherlockian discussions even today, forty years later.

George Scheetz, however, has wandered among many a scion, from the Double-Barrelled Tiger Cubs of Champaign-Urbana to The Hounds of the Baskerville (sic), with many a stop at the Sublibrarians group in the American Library Association along the way. And when he wanders back to town on occasion, as he did by surprise this week, the group we talk most about is The Hansoms of John Clayton, Peoria's original Sherlockian society.

It always inspires one to pursue the Sherlockian society rabbit once more, even if one is usually rather bad at it, and quite happy with a Sherlockian library discussion group, but that's a matter for another time. One of the highlights of this evening, which I'm taking a whole lot of preface to get to, was George's quest for issues of Afghanistanzas, the newsletter/journal of the Double-Barrelled Tiger Cubs of Champaign-Urbana.

The Cubs were a very different group from most, consisting mostly of a rotating cast of college students, yet having a treasury well-funded by campus movie nights, which at one point allowed them to bring John Bennett Shaw all the way from Santa Fe, New Mexico to speak. Due to the ever-changing nature of the group, however, finding a single individual with a complete run of their newsletter is, as this point, a very rare thing.

George had been asking about a later issue that he knew I had, from a photo on the now-defunct Sherlock Peoria website. 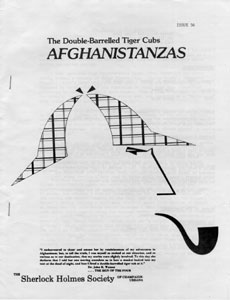 When he had said "the last issue of Afghanistanzas" to me, however, I was picturing something entirely different, which did not become apparent until I pulled the issue that I thought he wanted out of a cubbyhole in my shelves. The little glowing-greed issue I had was one he had never even heard of before. Apparently, Afghanistanzas went on for longer than he had realized, and my odd little issue gave clues that even more existed . . . somewhere. So off George went, having completed one quest, but having found another. 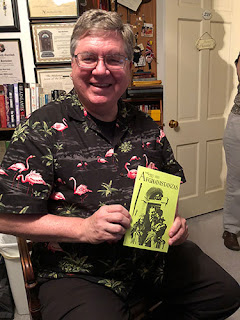 It was a good reminder that we never know what piece of today we might want to have in our hands tomorrow. Making items time travel forward into the future is a super-power we all have if we care to exert it, and when we do successfully pull it off with that one perfect item, it can almost seem like magic. Foresight is a wizard skill that one can develop without being psychic, if one thinks hard enough about the possibilities, plans ahead, and maybe gets lucky as well.

And while we didn't see any wizarding on this particular eve, as always, a little good old Sherlockian camaraderie can be just magic enough.

Posted by Sherlock Peoria at 9:32 PM